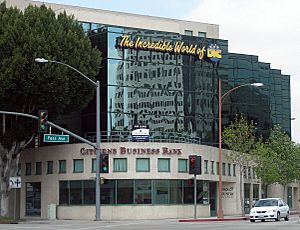 Its American arm was started in 1982 as DiC Enterprises. The company's United States headquarters were in Burbank, California.

In 1986, Andy Heyward bought the company, making the US headquarters the main base of operations.

In 1993, DiC Animation City (as it was then known) and Capital Cities/ABC formed DIC Entertainment LP and in 1995 it became a subsidiary of The Walt Disney Company.

In 2000 with an investment by Bain Capital, Heyward re-purchased DiC Enterprises (as it was then known). He purchased Bain Capital's part in 2004.

In early 2006, DiC Entertainment and CBS Corporation signed a multi-year deal for a new 3-hour long programming block for Saturday mornings on CBS. The resulting KOL Secret Slumber Party on CBS was started the following fall.

On June 20, 2008, it was announced that DiC would be bought out by Cookie Jar Group. On July 23, 2008, Cookie Jar completed the buy out of DiC Entertainment, and then it was merged with Cookie Jar Entertainment.

All content from Kiddle encyclopedia articles (including the article images and facts) can be freely used under Attribution-ShareAlike license, unless stated otherwise. Cite this article:
DiC Facts for Kids. Kiddle Encyclopedia.