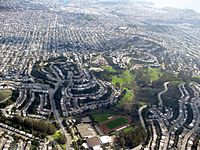 Diamond Heights is a neighborhood in central San Francisco, California, roughly bordered by Diamond Heights Boulevard and Noe Valley to the north and east and Glen Canyon Park to the south and west.

Diamond Heights was the first project of the San Francisco Planning and Urban Research Association, intended to use its redevelopment powers for land on the hills in the center of the city to be developed with, rather than against, the topography. Few existing residents needed to be relocated for the redevelopment program, which included housing for a range of incomes, churches, schools, parks, and a commercial center.

The Water Department appropriated more than $500,000 for a water system for the redevelopment. The Board of Supervisors and Diamond Heights Property Owners' Association debated the "Diamond Heights Redevelopment Project Area B-1" plan. In 1955, alternative proposals to the supervisors' plan were presented in an effort to protect the property rights of existing property owners, and to give them preference to exchange their property for other sites. The Board rejected the motion to add these alternative plans to the legislation. The final plan was approved on October 24, 1955. 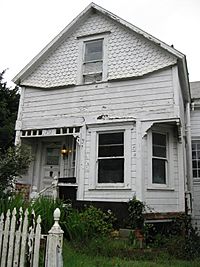 Some houses survived the redevelopment. A wood-frame house with separate garage stands at 70 Gold Mine Drive, just downhill from Diamond Heights Boulevard. According to the San Francisco Office of the Assessor, this house was built in 1895.

Ruth Asawa School of the Arts high school and the San Francisco Juvenile Probation Department's Juvenile Justice Center are both just northwest of Diamond Heights, at the intersection of Portola and Woodside.

Public transportation in Diamond Heights is provided by Muni's 35 Eureka, 48 Quintara, and 52 Excelsior lines. All connect to the Muni Metro system; the 35 goes to Castro Street Station, the 48 goes to West Portal Station, and the 52 goes to Forest Hill Station. Additionally, the 35 and 52 connect to the Bay Area Rapid Transit system at the Glen Park Station.

All content from Kiddle encyclopedia articles (including the article images and facts) can be freely used under Attribution-ShareAlike license, unless stated otherwise. Cite this article:
Diamond Heights, San Francisco Facts for Kids. Kiddle Encyclopedia.