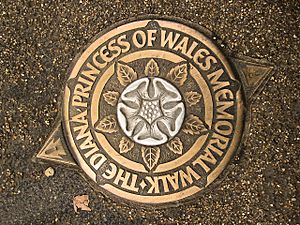 The walk passes between Kensington Gardens, Hyde Park, Green Park and St. James's Park in a figure-eight pattern, passing five sites that are associated with Princess Diana's life: Kensington Palace, Spencer House, Buckingham Palace, St. James's Palace, and Clarence House. It is marked with ninety individual plaques, each of which has a heraldic rose etched in the centre made of aluminium. Prime Minister Gordon Brown, who was the Chairman of the Diana, Princess of Wales, Memorial Committee was quoted as saying it is "one of the most magnificent urban parkland walks in the world." The Diana, Princess of Wales Memorial Walk is in London, and celebrates the life of the Princess of Wales who died in a car accident on 31 August 1997 in Paris.

The walk was constructed at a cost of £1.3 million. No member of the Royal Family was present at its opening.

All content from Kiddle encyclopedia articles (including the article images and facts) can be freely used under Attribution-ShareAlike license, unless stated otherwise. Cite this article:
Diana, Princess of Wales Memorial Walk Facts for Kids. Kiddle Encyclopedia.