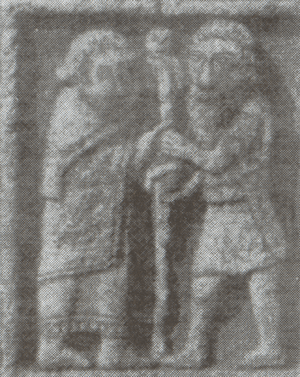 Scene from the east face of the Cross of the Scriptures, Clonmacnoise. The figures probably represent Saint Ciarán and Diarmait mac Cerbaill founding Clonmacnoise: "Then Ciarán planted the first stake, and Diarmait son of Cerball was along with him. Said Ciarán to Diarmait when setting the stake, 'Let, O warrior, thy hand be over my hand, and thou shalt be in sovranty over the men of Ireland.'"

Diarmait mac Cerbaill (died c. 565) was King of Tara or High King of Ireland. According to traditions, he was the last High King to follow the pagan rituals of inauguration, the ban-feis or marriage to goddess of the land.

While many later stories were attached to Diarmait, he was a historical ruler and his descendants were of great significance in Medieval Ireland. He is not to be confused with the later Diarmait mac Cerbaill (King of Osraige), son of king Cerball mac Dúnlainge.

All content from Kiddle encyclopedia articles (including the article images and facts) can be freely used under Attribution-ShareAlike license, unless stated otherwise. Cite this article:
Diarmait mac Cerbaill Facts for Kids. Kiddle Encyclopedia.