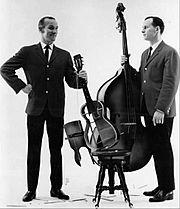 Richard Remick "Dick" Smothers (born November 20, 1939) is an American actor, comedian, composer and musician. He is best known for being half of the musical comedy team the Smothers Brothers, with his older brother Tom.

Smothers was born on November 20, 1939 in New York City, New York. He studied at Verdugo Hills High School, later at the Redondo Union High, and at the San José State University.

All content from Kiddle encyclopedia articles (including the article images and facts) can be freely used under Attribution-ShareAlike license, unless stated otherwise. Cite this article:
Dick Smothers Facts for Kids. Kiddle Encyclopedia.