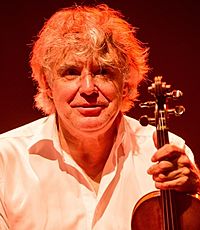 Didier Lockwood (11 February 1956 – 18 February 2018) was a French jazz violinist. He played in the progressive rock/jazz fusion band Magma in the 1970s. He was known for his use of electric amplification and experimentation on different sounds on the electric violin. He was born in Calais, France.

All content from Kiddle encyclopedia articles (including the article images and facts) can be freely used under Attribution-ShareAlike license, unless stated otherwise. Cite this article:
Didier Lockwood Facts for Kids. Kiddle Encyclopedia.