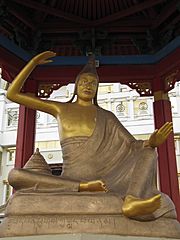 Dignāga (a.k.a. Diṅnāga, c. 480 – c. 540 CE) was an Indian Buddhist scholar and one of the Buddhist founders of Indian logic (hetu vidyā). Dignāga's work laid the groundwork for the development of deductive logic in India and created the first system of Buddhist logic and epistemology (Pramana).

According to Georges B. Dreyfus, his philosophical school brought about an Indian "epistemological turn" and became the "standard formulation of Buddhist logic and epistemology in India and Tibet." Dignāga's thought influenced later Buddhist philosophers like Dharmakirti and also Hindu thinkers of the Nyaya school. Dignāga's epistemology accepted only "perception" (pratyaksa) and "inference" (anumāṇa) are valid instruments of knowledge and introduced the widely influential theory of "exclusion" (apoha) to explain linguistic meaning. His work on language, inferential reasoning and perception were also widely influential among later Indian philosophers. According to Richard P. Hayes "some familiarity with Dinnaga's arguments and conclusions is indispensable for anyone who wishes to understand the historical development of Indian thought."

Dignāga was born in Simhavakta near Kanchipuram and very little is known of his early years, except that he took Nagadatta of the Pudgalavada school as his spiritual preceptor, before being expelled and becoming a student of Vasubandhu. 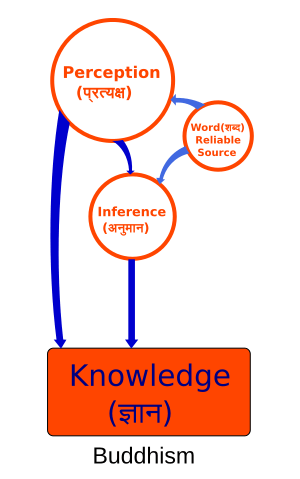 Buddhist epistemology holds that perception and inference are the means to correct knowledge.

Perception is a non-conceptual knowing of particulars which is bound by causality, while inference is reasonable, linguistic and conceptual. This conservative epistemic theory was in contrast to the Nyaya school who accepted other means of knowledge such asUpamāṇa(comparison and analogy).

Sensation is devoid of structure. That cognition in which there is no structure is sensation. What kind of thing is this so-called structure? Attaching a name, a universal and so forth.

According to Dignāga our mind always takes raw sense data or particulars and interprets them or groups them together in more complex ways, compares them to past experiences, gives them names to classify them based on general attributes (samanyalaksana) and so forth. This process he terms kalpana (arranging, structuring). This cognitive process is already different than sensation, which is a simple cognition based only on the immediately present. Thus pratyaksa is only awareness of particular sense data such as a patch of green color and the sensation of hardness, never awareness of a macroscopic object such an apple which is always a higher level synthesis. For Dignāga, sensation is also inerrant, it cannot "stray" because it is the most basic and simple phenomenon of experience or as he puts it:

"it is impossible too for the object of awareness itself to be errant, for errancy is only the content of misinterpretation by the mind."

Also, for Dignaga, pratyaksa is mostly phenomenalist and is not dependent on the existence of an external world. It is also inexpressible and private.

Anumana (inference or reasoning) for Dignāga is a type of cognition which is only aware of general attributes, and is constructed out of simpler sensations. Inference can also be communicated through linguistic conventions.

A central issue which concerned Dignāga was the interpretation of signs (linga) or the evidence (hetu) which led one to an inference (anumana) about states of affairs; such as how smoke can lead one to infer that there is a fire. This topic of svārthānumāna (reasoning, literally "inference for oneself") is the subject of chapter two of the Pramāṇa-samuccaya while the topic of the third chapter is about demonstration (parārthānumāna, literally "inference for others"), that is, how one communicates one's inferences through proper argument.

According to Richard Hayes, in Dignāga's system, to obtain knowledge that a property (the "inferable property", sadhya) is inherent in a "subject of inference" (paksa) it must be derived through an inferential sign (linga). For this to occur, the following must be true:

Richard Hayes interprets these criteria as overly strict and this is because he sees Dignāga's system as one of rational skepticism. Dignāga's epistemology, argues Hayes, is a way to express and practice the traditional Buddhist injunction to not become attached to views and opinions. According to Hayes, for Dignāga, the role of logic is:

to counter dogmatism and prejudice. As a weapon in the battle against prejudice that rages in every mind that seeks wisdom--in minds of the vast majority of people who do not seek wisdom, prejudice simply takes full control without a contest-there is nothing as powerful as the kind of reason that lies at the heart of Dignaga's system of logic. For it should be clear that very few of our judgments in ordinary life pass the standards set by the three characteristics of legitimate' evidence. Taken in its strictest interpretation, none of the judgments of any but a fully omniscient being passes. And, since there is no evidence that there exist any fully omniscient beings, the best available working hypothesis is that no one's thinking is immune from errors that require revision in the face of newly discovered realities.

Dignāga considered the interpretation of conventional and symbolic signs such as the words and sentences of human language to be no more than special or conventional instances of the general principles of inference or anumana. He takes up several issues relating to language and its relationship to inference in the fifth chapter of his Pramāṇa-samuccaya.

During Dignāga's time, the orthodox Indian Nyaya school and also Hindu Sanskrit grammarians (such as Bhartṛhari) had discussed issues of epistemology and language respectively, but their theories generally accepted the concept of universals which was rejected by most Buddhist philosophers. Influenced by the work of these thinkers as well as by Buddhist philosophers of the Sautrantika school who rejected Hindu theories of universals in favor of nominalism (prajñapti), Dignāga developed his own Buddhist theory of language and meaning based on the concept of "apoha" (exclusion). Hattori Masaaki explains the doctrine thus:

a word indicates an object merely through the exclusion of other objects (anyapoha, -vyavrtti). For example, the word "cow" simply means that the object is not a non-cow. As such, a word cannot denote anything real, whether it be an individual (vyakti), a universal (jati), or any other thing. The apprehension of an object by means of the exclusion of other objects is nothing but an inference.

As noted by Hayes, the difficulty in studying the highly terse works of Dignāga is considerable, because none of them have survived in the original Sanskrit and the Tibetan and Chinese translations which do survive show signs of having been done by translators who were not completely certain of the meaning of the work. This difficulty has also led scholars to read Dignaga through the lens of later authors such as Dharmakirti and their Indian and Tibetan interpreters as well as their Hindu Nyaya opponents. Because of this tendency in scholarship, ideas which are actually innovations of Dharmakirti and later authors have often been associated with Dignaga by scholars such as Fyodor Shcherbatskoy and S. Mookerjee, even though these thinkers often differ.

Dignāga's magnum opus, the Pramāṇa-samuccaya (Compendium of Valid Cognition), examined perception, language and inferential reasoning. It presents perception as a bare cognition, devoid of conceptualization and sees language as useful fictions created through a process of exclusion (Apoha).

Dignāga founded a tradition of Buddhist epistemology and reasoning, and this school is sometimes called the "School of Dignāga" or "The school of Dinnāga and Dharmakīrti" (due to the strong influence of Dharmakīrti as well). In Tibetan it is often called “those who follow reasoning” (Tibetan: rigs pa rjes su ‘brang ba); in modern literature it is sometimes known by the Sanskrit 'pramāṇavāda', often translated as "the Epistemological School." Many of the figures in these were commentators on the works of Dinnāga and Dharmakīrti, but some of them also wrote original works and developed the tradition in new directions.

The work of this tradition also went on to influence the Buddhist Madhyamaka school, through the work of figures like Bhāvaviveka (c. 500 - c. 578), Jñanagarbha (700-760), and Śāntarakṣita (725–788). These thinkers attempted to adopt the logical and epistemological insights of Dinnāga and Dharmakīrti to defend the tenets of the Madhyamaka school.

Dignāga also influenced non-Buddhist Sanskrit thinkers. According to Lawrence J. McCrea, and Parimal G. Patil, Dignāga set in motion an "epistemic turn" in Indian philosophy. After Dignāga, most Indian philosophers were now expected to defend their views by using a fully developed epistemological theory (which they also had to defend).

All content from Kiddle encyclopedia articles (including the article images and facts) can be freely used under Attribution-ShareAlike license, unless stated otherwise. Cite this article:
Dignāga Facts for Kids. Kiddle Encyclopedia.