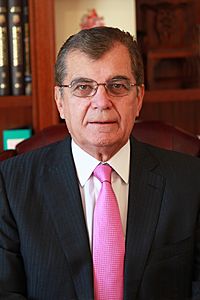 Dimitris Kremastinos (Greek: Δημήτρης Κρεμαστινός; 1 May 1942 – 8 May 2020) was a Greek politician and physician. He was a member of the European Academy of Sciences and Arts.

On 26 March 2020, Kremastinos was hospitalized in Athens with COVID-19. He died two weeks later on 8 May from the infection, aged 78.

All content from Kiddle encyclopedia articles (including the article images and facts) can be freely used under Attribution-ShareAlike license, unless stated otherwise. Cite this article:
Dimitris Kremastinos Facts for Kids. Kiddle Encyclopedia.