"Ding Dong Bell" or "Ding Dong Dell" is a popular English language nursery rhyme. It has a Roud Folk Song Index number of 12853. 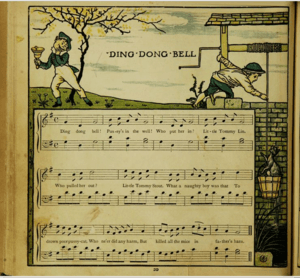 Ding Dong Bell song on a page from The Baby's Opera: A book of old Rhymes and The Music by the Earliest Masters

The most common modern version is:

Ding, dong, bell,
Pussy’s in the well.
Who put her in?
Little Johnny Flynn.
Who pulled her out?
Little Tommy Stout.
What a naughty boy was that,
To try to drown poor pussy cat,
Who never did him any harm,
But ate all of the mice in the farmer's barn.

The verse printed in Thomas Ravenscroft's Pammelia, Musicks Miscellanie (1609) as a canon for four voices

The earliest recorded reference to the rhyme is from John Lant, the organist of Winchester Cathedral in 1580, who recorded the following rhyme:

Jacke boy, ho boy newes,
The cat is in the well,
Let us ring now for her Knell,
Ding dong ding dong Bell.

It was printed in Thomas Ravenscroft's Pammelia, Musicks Miscellanie in 1609, as a canon for four voices.

The phrase 'Ding, dong, bell' also appears in these passages of Shakespeare's plays:

The Tempest, Act I, Scene II:

The earliest version to resemble the modern one is from Mother Goose's Melody published in London around 1765. The additional lines that include (arguably) the more acceptable ending for children with the survival of the cat are in James Orchard Halliwell's Nursery Rhymes of England, where the cat is pulled out by "Dog with long snout".

Several names are used for the malevolent Johnny Green, including Tommy O' Linne (1797) and Tommy Quin (c. 1840). Iona and Peter Opie suggested that it may have had its origins in Tom a lin or Tom o' Lin, the protagonist of another nursery rhyme.

There is also a version composed as a four-part round by William Stonard (1585-1630) to the following text: 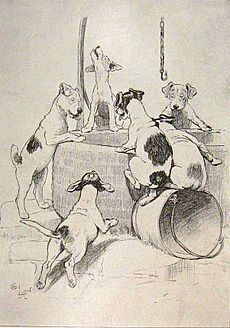 The most common modern version is arguably already a moderation of the theme of the original rhyme.

In his New Nursery Rhymes for Old (1949) Geoffrey Hall published the following alternative:

Ding dong bell
Pussy's at the well
Who took her there?
Little Johnny Hare.
Who'll bring her in?
Little Tommy Thin.
What a jolly boy was that
To get some milk for pussy cat
Who ne'er did any harm
But played with the mice in
His father's barn.

A modern version replaces the word "pussy" with "kitty".

All content from Kiddle encyclopedia articles (including the article images and facts) can be freely used under Attribution-ShareAlike license, unless stated otherwise. Cite this article:
Ding Dong Bell Facts for Kids. Kiddle Encyclopedia.