Ding Ning (simplified Chinese: 丁宁; traditional Chinese: 丁寧; born 20 June 1990 in Daqing) is a Chinese table tennis player. She became olympic champion in Rio 2016 in singles and team category. She is a lefthanded-player and uses the Shakehand-style. 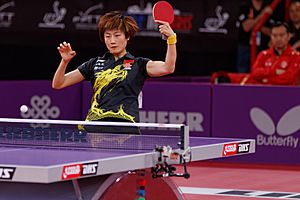 2012 she won gold with the team at the world championships. In the final they beat Singapore. In the same year Ding took for her first time part in the Olympics in London, where she won with the team gold and in the singles met Li Xiaoxia, where she lost and silver won. At the grand finals she won for her first participation silver in the singles. At the world championships 2013 she came to the semifinal in the singles category, but she lost to Li Xiaoxia again. Indeed she won silver in doubles.

The year 2016 began good for Ding Ning: She became world champion with the team again and won for her first time gold in the singles at the olympics and with the team too. At the world championships 2017 Ding won for her third time gold in the singles and in the doubles she won silver. In 2018 she only played the world team cup, where she won gold with the chinese national team.

All content from Kiddle encyclopedia articles (including the article images and facts) can be freely used under Attribution-ShareAlike license, unless stated otherwise. Cite this article:
Ding Ning Facts for Kids. Kiddle Encyclopedia.