Daqing (Chinese: 大庆; pinyin: Dàqìng; used to be romanized as Taching) is a city in Heilongjiang province, China. Daqing is a prefecture-level city, which means it ranks below a province and above a county. The city is called the "Oil Capital of China" because oil was discovered at the Daqing Oil Field in 1959. It is one of China's most well-known places because of this.

In 1898, Russia built the Chinese Eastern Railway in the area. There is a station called Sartu in the area that is still in use.

In 1959, a town close to the Daqing Oil Field was created. It was to house workers and to help companies and industries use the resources. In 1960, another city was created nearby, named Anda City. This city controlled the Daqing Oil Field area. The town grew too large eventually and became a special administrative region. In 1979, the city was renamed Daqing, after the oil field.

In the 1960s, Mao Zedong said the slogan "In industry, learn from Daqing". It meant that Daqing was very important for the Chinese industry. Daqing oil workers set an example for how cities in China should be.

Daqing has protested the Chinese government sometimes. In 2002, close to 100,000 oil workers from Daqing and Liaoyang gathered to protest how the government handled money and paid them. In 2017, there were plans to build an aluminum plant in Daqing. Thousands of people protested against the plans.

Daqing is in the Songnen Plain, in a flat area. It has an average elevation of 146 metres (479 feet). The city is 150 kilometres (93 miles) southeast of Harbin and 139 kilometres (86 miles) northwest of Qiqihar. 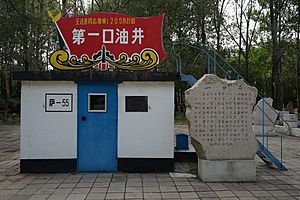 Daqing's economy is mainly based on oil and petroleum. There are lots of major pipelines that transport oil to and from the rest of China and Russia. In 2013, Russia agreed to send oil to China. That oil will be going through the pipeline to Daqing. Close to 60% of the gross domestic product (GDP) was because of petroleum and oil exports. Daqing had a GDP of 298 billion renminbi in 2015.

Daqing exports over 10 million tonnes of oil each year. Wax, tar, and benzene were also exported to countries including the United States. The main exports are oil and gas, construction materials, food, and furniture.

Daqing is a major railway stop in Heilongjiang. It connects two major railways, the Harbin-Manzhouli Railway and the Tongliao-Ranghulu Railway. It also has three major railway stations. Daqing also has an airport, the Daqing Sartu Airport. It opened on 1 September 2009. It has flights to large cities like Beijing, Guangzhou, and Shanghai. Daqing is linked to the Chinese highway network through the G45 Daqing-Guangzhou Expressway and the G10 Suifenhe-Manzhouli Expressway.

All content from Kiddle encyclopedia articles (including the article images and facts) can be freely used under Attribution-ShareAlike license, unless stated otherwise. Cite this article:
Daqing Facts for Kids. Kiddle Encyclopedia.