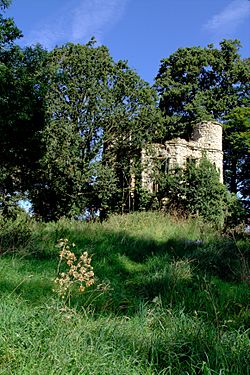 Dinton Castle (also known as Dinton Folly) is located just north of the village of Dinton, in Buckinghamshire and was built as an eyecatcher from the Dinton Hall estate, by Sir John Vanhattern in 1769. He used the castle to exhibit his collection of fossils, ammonites, embedded in the limestone walls.

The "castle" may have been used as servants' quarters for Dinton Hall in the 1800s "and at some point may have served as a temporary meeting place for a local non-conformist congregation", according to a recent report.

This "sham castle or folly" has been Grade II Listed since 1951 when it was "ruinous". The summary states: "Octagonal plan with circular towers at east and west. 2 storeys, the towers carried up to 3 storeys". In the late 20th century, the castle was added to the English Heritage Buildings at Risk Register as a Priority A site and onto the council's Buildings at Risk Register. In 2009, the structure was stabilised, new lintons were installed, some windows were repaired and the entrance arch was repaired.

A BBC article indicated that the property had been sold in 2012 but provided no specifics. Another source indicates that the purchaser was Brett O'Connor. According to photos published by The Guardian in October 2012, the castle was still a ruin at that time. The BBC article also stated that the building was beside a Saxon burial ground. Another source indicates that over the past centuries, and into the 20th century, various artifacts and skeletons had been found near the structure.

The BBC reported that local rumours suggested that the castle was haunted by the Dinton Hermit John Bigg, who died in 1696. In his later years, Biggs was a hermit who lived in a cave on the property. Previously, he had been clerk to Simon Mayne who was among the judges when King Charles I was tried in 1649. Local rumours claim that Biggs was involved in the Execution of Charles I

In 2016, the property was purchased by a Spanish architect, Jaime (or Jimmy) Fernandez.

On 26 Jan 2017 planning permission was granted to Fernandez by Aylesbury Vale District Council for the castle to be renovated into a two-bedroomed dwelling. In September 2018, the process of the transformation of the buildings from a ruin to a family home was featured on Channel 4's Grand Designs programme. The restoration of Dinton Castle as a family home in 2017-2018 was featured in the article "For Sale: A Mini English Castle", The Wall Street Journal, Jan. 30, 2019.

The renovation cost over £300,000, far exceeding the original £100,000 purchase price. Afterwards, the castle was occupied by the Fernandez family. Grand Design published a series of photographs confirming the results produced by the renovations. The building was described as follows by Country Life (magazine) in February 2020:

Three quirky, octagonal floors rise from almost an acre of Waddesdon Estate countryside, which one can view in its fullest from the panoramic roof terrace. The building houses a sitting room, two en-suite bedrooms and a welcoming kitchen on the ground floor.

All content from Kiddle encyclopedia articles (including the article images and facts) can be freely used under Attribution-ShareAlike license, unless stated otherwise. Cite this article:
Dinton Castle Facts for Kids. Kiddle Encyclopedia.