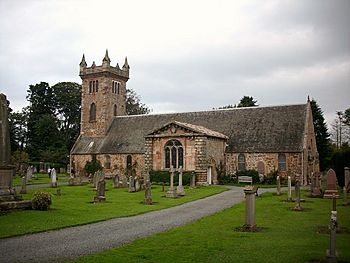 Dirleton Kirk is situated to the north of the village green in Dirleton, in East Lothian, Scotland. Dirleton village lies on the south shore of the Firth of Forth 21 miles east of Edinburgh and two miles west of North Berwick on the A198 road. The church is at .

Early Christianity in the Parish now known as Dirleton 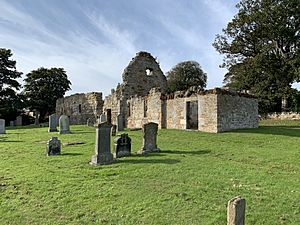 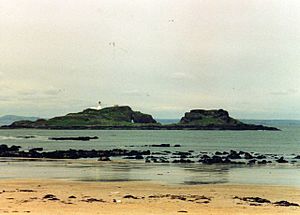 Around the same time, The de Vaux family founded a chapel, dedicated to All Saints, in Dirleton. Then, in 1444, the Haliburton's, now the lords of Dirleton Castle founded a college of priests at their church in Dirleton. The old church at Gullane continued beyond the Reformation but in 1612, after a plea from Sir Thomas Erskine, a future earl of Kellie, to Parliament, the parish church was removed to Dirleton after stating his case of the old church was no longer fit for purpose because of its exposure to the blowing sands of the nearby beach. In 1576, Andrew McGhie, the last vicar at Gullane St. Andrews was reproved by King James VI for his excessive use of tobacco. 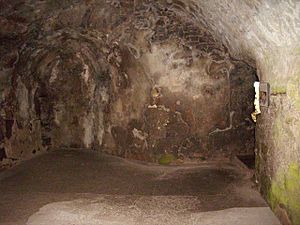 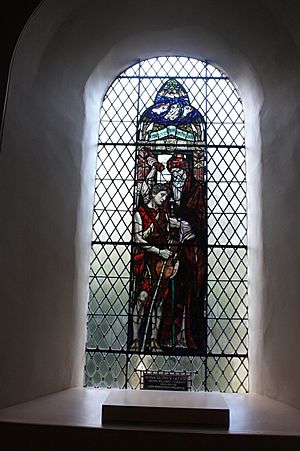 David being anointed by Samuel, Dirleton Kirk, by Douglas Strachan, 1916

"It is long and wide, with round–headed windows under the low eaves. The s side and roof are interrupted by the pedimented aisle built of ashlar by James Maxwell, Earl of Dirleton. It has a stone roof nicely supported along the eaves by stone brackets, and between the rusticated corner piers a looped–traceried window. On the e side, a pedimented doorway"

Over the years the church was altered and enlarged and the Archerfield, or Dirleton Aisle was built over the grave of James Maxwell, 1st Earl of Dirletoun. This aisle is believed to be the first piece of neo-classical architecture in Scotland. In 1836, the tower was crowned with Gothic pinnacles allowing the parapets of the tower to blend charmingly with the rest of the church.

Mary Nisbet Hamilton (1777–1855) did much for the church. It was she who financed the building of the new manse in 1828, ensured the tower was completed and added a vestry. By way of a memorial to his wife, Mr. Russell of Archerfield donated a stained glass window showing 'St. Francis and the animals' on which more than ninety animals are depicted. Miss Margaret Chilton was the designer.

Remarkably, the church records date from 1655 and there have only been twenty ministers in the parish since 1576.

In 1971 the church was designated as a Category A listed building.

Taken from the Fasti Ecclesiae Scoticanae by Hew Scott.

^^ James Alston was elected Moderator of the General Assembly of the Church of Scotland in 1725.

The parish now consists of Dirleton, Fenton Barns, Archerfield, the Westerdunes district of North Berwick and the hamlet of Kingston. The church has been linked with the Abbey Church (Church of Scotland) in North Berwick since 1989 and the present minister is Dr. David Graham.

All content from Kiddle encyclopedia articles (including the article images and facts) can be freely used under Attribution-ShareAlike license, unless stated otherwise. Cite this article:
Dirleton Kirk Facts for Kids. Kiddle Encyclopedia.