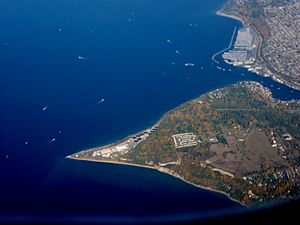 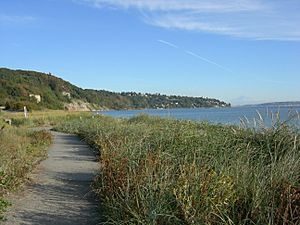 Discovery Park is a 534-acre (2.16 km2) park on the shores of Puget Sound in the Magnolia neighborhood of Seattle, Washington. It is the city's largest public park and contains 11.81 miles (19.01 km) of walking trails. United Indians of All Tribes' Daybreak Star Cultural Center is within the park's boundaries. A lighthouse is located on West Point, the westernmost point of the park and the entire city of Seattle, and on the south side of the North Beach strip is a sewage treatment plant, but it is almost entirely concealed from the marsh, beach, and trail. The Discovery Park Loop Trail, designated a National Recreation Trail in 1975, runs 2.8 miles (4.5 km) through the park, connecting to other trails.

The park is built on the historic grounds of Fort Lawton; most of the Fort Lawton Historic District (FLHD) falls within the park (although an enclave within the district remains in military hands), as does the West Point Lighthouse. Both the FLHD and the lighthouse are on the National Register of Historic Places.

Forests, beaches, prairies, and bluffs dominate the landscape of the park. 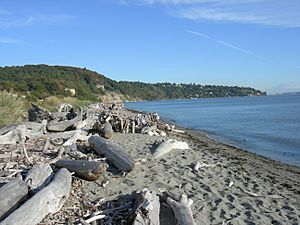 The park is one of the best places in the city to view wildlife, especially birds and marine mammals. The Seattle Audubon Society has compiled a checklist of 270 species of birds seen in the park and nearby waters. Elliott and Shilshole Bays are home to harbor seals and California sea lions, while the wooded areas support Townsend's chipmunks. Most visitors enjoy hiking the Loop Trail, which forms a circuit through forest, meadow, and shrub habitats around the upland portion of the park, and provides excellent views of Puget Sound. Many historical buildings stand in semi disrepair in the main grassy area. The shoreline is accessible by road or trail (the hike back up from the north beach is mildly strenuous), however, a permit is required prior to driving a vehicle to the beach. Free permits can be obtained at the Environmental Learning Center in the East Parking Lot and are designated for qualified individuals only (groups with children 7 and under, seniors 62+, and people with a physical disability). The south beach is on the windward side of the peninsula, Elliott Bay, and the north beach is on the leeward side and has views of Shilshole Bay. At the point between the north and south beaches is West Point and the West Point Lighthouse. Coniferous forest is mostly to be found in the north bluff region and can be accessed from the road that leads to the beach. Deciduous woods surround the two parking lots and the visitor center. Overlooking the south bluff is a large meadow with small trees and shrubs. Bigleaf maple, red alder, bitter cherry, Douglas-fir, western red cedar, and western hemlock make up a large percentage of the tree cover in the park. Invasive species such as Himalayan blackberry, Scot's broom, English ivy, and holly are present throughout, requiring active on-going management to suppress. 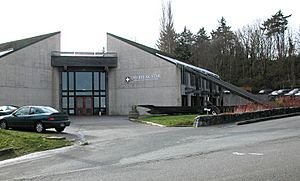 Discovery Park is a relatively recent creation, having been created in the early 1970s from land surplus to the U.S. Army's Fort Lawton. The site for the 1,100-acre (4.5 km2) fort had been given to the Army by the city in 1898, and the fort opened in 1900. The Army offered to sell it back to the city for one dollar in 1938 but the city refused, citing maintenance concerns. Much of the land was surplused in 1971, given to the city in 1972, and dedicated as Discovery Park in 1973. Fort Lawton continued as an Army Reserve facility until it was officially closed at a ceremony on February 25, 2012. The Grunge band Temple of the Dog filmed the music video for their hit single "Hunger Strike" on the shores of Discovery Park. 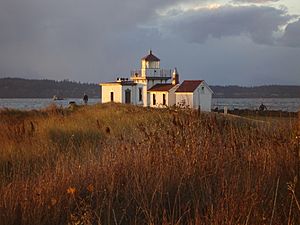 The most controversial issue regarding the Discovery Park is what to do with former military property acquired in and around the park. In 2004, the City of Seattle announced it would purchase 23 (later 24) acres of U.S. Navy property within the park. The decision was ultimately made to demolish the structures to create open space. In 2008, plans to close Army base Fort Lawton opened up debate over what to do with the former military properties: housing advocates wanted it converted into affordable housing, while some neighborhood groups opposed the idea. The City Council approved building up to 216 housing units, leading to a lawsuit. As of March 2009, the King County Superior Court Judge ordered the city to comply with the State Environmental Policy Act (SEPA) process.

In 2008, a group of homeless people and homeless rights advocates set up camp in the park, but was forced to vacate by the city.

In September 2010, the U.S Department of Housing and Urban Development (HUD) approved October 10, 2008 Proposed Redevelopment Plan and Homeless Assistance Application for the US Army Ft. Lawton Complex. The HUD letter to the mayor of Seattle stated the need for homeless housing outweighed the need for other redevelopment proposals and that 144 family housing units and over 2000 beds in "supportive" permanent housing should be built and that HUD was ready to assist the city of Seattle, if required.

The park has a remarkable tendency to attract wild animals. In the winter of 2008-2009, a coyote in the park made headlines, and in May 2009, a black bear was seen. In September 2009, the park was closed because of the presence of a cougar. The animal was trapped and transported to the Cascade mountains.

All content from Kiddle encyclopedia articles (including the article images and facts) can be freely used under Attribution-ShareAlike license, unless stated otherwise. Cite this article:
Discovery Park (Seattle) Facts for Kids. Kiddle Encyclopedia.