DISH is a town in Denton County, Texas, United States. The town had a population of 201 at the 2010 census. This community, established in June 2000, was originally named Clark. In November 2005, the community accepted an offer to rename itself "DISH" (all capital letters) as part of a commercial agreement with a satellite television company.

The settlement was originally named for its founder, Landis Clark, who incorporated the town in June 2000 and served as its first mayor. In exchange for renaming the town to DISH, all residents received free basic television service for ten years and a free digital video recorder from Dish Network. There was no formal opposition to renaming Clark; twelve citizens attended the council meeting to support the measure. 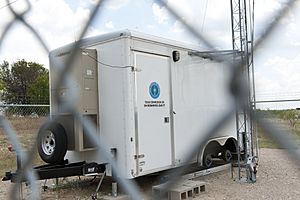 In 2005, energy companies began drilling natural gas wells at DISH. Town residents complained of foul smells, and of health issues they linked to the petroleum emissions from the wells. The town spent $15,000 on an air quality test, which found elevated levels of several chemicals including benzene. Following that, the energy companies made changes.

In response to concerns about the town's air quality, the Texas Department of State Health Services conducted air quality tests, and in May 2010, released its results for DISH, including tests of blood and urine samples from 28 DISH residents that were tested for volatile organic compounds (VOCs). The agency concluded that:

The information obtained from this investigation did not indicate that community-wide exposures from gas wells or compressor stations were occurring in the sample population. This conclusion was based on the pattern of VOC values found in the samples. Other sources of exposure such as cigarette smoking, the presence of disinfectant by-products in drinking water, and consumer or occupational/hobby related products could explain many of the findings.

The state installed an air quality monitoring station at DISH, which showed that, as of 2012, air pollutants were generally within government limits.

A article about the air quality in DISH by NPR in 2012 stated that "better studies are needed" to test for the health effects of drilling emissions, and also that the installation of gas wells in populated places "is way out ahead of public health evaluations of any kind to date".

In the January 10, 2006, episode of Comedy Central's The Daily Show, correspondent Ed Helms produced a news segment about DISH.

All content from Kiddle encyclopedia articles (including the article images and facts) can be freely used under Attribution-ShareAlike license, unless stated otherwise. Cite this article:
Dish, Texas Facts for Kids. Kiddle Encyclopedia.