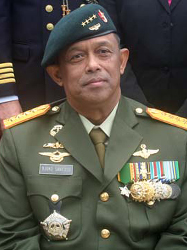 General Djoko Santoso ( 8 September 1952 – 10 May 2020) was an Indonesian general. He was Chief of Staff of the Indonesian Army from 2005 to 2007. He was then appointed to the highest military office which is Commander of the Indonesian National Armed Forces. He had the job from 2007 until his retirement in 2010.

All content from Kiddle encyclopedia articles (including the article images and facts) can be freely used under Attribution-ShareAlike license, unless stated otherwise. Cite this article:
Djoko Santoso Facts for Kids. Kiddle Encyclopedia.