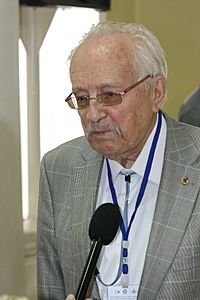 Dmitry Vasil'evich Shirkov (Russian: Дми́трий Васи́льевич Ширко́в; 3 March 1928 – 23 January 2016) was a Russian theoretical physicist. He was known for his works to quantum field theory and to the development of the renormalization group method. He used to work at Lund University in Sweden. He was born in Moscow, Russia.

All content from Kiddle encyclopedia articles (including the article images and facts) can be freely used under Attribution-ShareAlike license, unless stated otherwise. Cite this article:
Dmitry Shirkov Facts for Kids. Kiddle Encyclopedia.