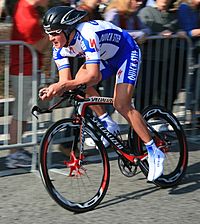 Dmytro Grabovskyy (Ukrainian: Дмитро Грабовський, 30 September 1985 – 23 January 2017) was a Ukrainian-Israeli professional road bicycle racer. He was born in Simferopol, Ukraine. He last competed for UCI Continental team ISD-Lampre. He was second in the time trial for juniors at the 2005 World Championship Cycling in Madrid and he won the road race.

Grabovsky became an Israeli citizen in 2014.

All content from Kiddle encyclopedia articles (including the article images and facts) can be freely used under Attribution-ShareAlike license, unless stated otherwise. Cite this article:
Dmytro Grabovskyy Facts for Kids. Kiddle Encyclopedia.