Dock Bridge is a pair of vertical lift bridges crossing the Passaic River at Newark, Essex County and Harrison, Hudson County, New Jersey, United States, used exclusively for railroad traffic. It is the seventh crossing from the river's mouth at Newark Bay and is 5.0 miles (8.0 km) upstream from it. Also known as the Amtrak Dock Vertical Lift, it carries Amtrak, NJ Transit, and PATH trains. It is listed on the state and federal registers of historic places. 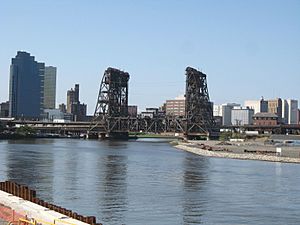 Looking west along the Passaic River

The bridge was built by the Pennsylvania Railroad (PRR) for its main line. The west span carries three tracks and opened in 1935 along with the west half of Newark Penn Station. The lift span is 230 feet (70 m) over bearings (clear channel 200 feet or 61 meters), the longest three-track lift span in the world when built. The east spans opened in 1937 when the Hudson and Manhattan Railroad (H&M, later called PATH) shifted its rapid transit trains from the Centre Street Bridge to the newly built station. With the opening of the eastern span, the PRR closed Manhattan Transfer station in the Kearny Meadows, where previously steam and electrical trains were changed and passengers could transfer to trains to New York Penn Station on the PRR or to Hudson Terminal on the H&M.

The west span carries three tracks exclusively used by Amtrak and NJ Transit for Northeast Corridor intercity and commuter traffic between Newark and New York City. The east span carries two PATH tracks used by PATH's Newark-World Trade Center service and one NEC track shared by Amtrak and NJ Transit. Due partly to PATH's use of the Dock Bridge, it is legally a commuter railroad under the jurisdiction of the Federal Railroad Administration even though it has long operated as a rapid transit system.

The lower 17 miles (27 km) downstream of the 90-mile (140 km) long Passaic River below the Dundee Dam is tidally influenced and navigable. When closed the bridge has a vertical clearance of 24 feet (7.3 m) above mean high water and opens to clear 135 ft (41 m). It is infrequently lifted and, prior to 2014, had not received a request for a river traffic opening since 2004. In 2011 regulations were changed so that it need not be open on demand (as it previously had) but with a 24-hour notice. During four-year removal of dredged materials from the Passaic the bridge is expected to open upwards of 10 times per day. In 2020 Amtrak requested that bridge remain in closed position until such time as it can be rehabilitated.

All content from Kiddle encyclopedia articles (including the article images and facts) can be freely used under Attribution-ShareAlike license, unless stated otherwise. Cite this article:
Dock Bridge Facts for Kids. Kiddle Encyclopedia.