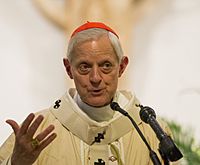 Donald William Wuerl (born November 12, 1940) is an American prelate of the Catholic Church. He was born in Pittsburgh, Pennsylvania.

He was named Archbishop of Washington by Pope Benedict XVI and made a cardinal by him in 2010.

Wuerl was criticized for how he handled abuse cases during his time in Pittsburgh in 2018. Wuerl has denied mishandling the cases.

On October 12, 2018, Pope Francis accepted his resignation as Archbishop of Washington. He remains a member of the College of Cardinals, eligible to vote in a papal election until November 2020. Wilton Daniel Gregory will replace him.

All content from Kiddle encyclopedia articles (including the article images and facts) can be freely used under Attribution-ShareAlike license, unless stated otherwise. Cite this article:
Donald Wuerl Facts for Kids. Kiddle Encyclopedia.