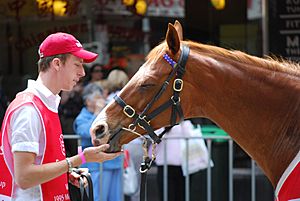 Doriemus (17 November 1990 – 11 January 2015) was a Thoroughbred racehorse. He began his career in New Zealand and became famous Australia by winning the Caulfield and Melbourne Cups in 1995. He became just the ninth horse to win both cups.

Doriemus was euthanised due to a hoof infection after a paddock accident on 11 January 2015. He was 24.

All content from Kiddle encyclopedia articles (including the article images and facts) can be freely used under Attribution-ShareAlike license, unless stated otherwise. Cite this article:
Doriemus Facts for Kids. Kiddle Encyclopedia.