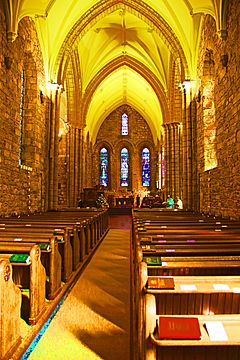 Dornoch Cathedral is a former cathedral and is now a Church of Scotland parish church serving the small Sutherland town of Dornoch, in the Scottish Highlands. As a congregation of the Church of Scotland, which is Presbyterian, the church is not the seat of a bishop but retains the name due to being, historically, the seat of the Bishop of Caithness. The Cathedral's churchyard is adjoined by Dornoch Castle, the somewhat reconstructed remains of the medieval palace of the Bishops of Caithness.

It was built in the 13th century, in the reign of King Alexander II (1214–49) and the episcopate of Gilbert de Moravia (died 1245) (later Saint Gilbert of Dornoch) as the cathedral church of the diocese of Caithness (moved to Dornoch from Halkirk). William de Moravia (later Sutherland), 1st Earl of Sutherland, was buried in the cathedral in 1248.

In 1570, the Cathedral was burnt down by the Mackays of Strathnaver during local feuding. Full 'repairs' (amounting to one of the most drastic over-restorations on any important Scottish medieval building) were not carried out until 1835-37, by the architect William Burn, funded by Countess of Sutherland at a cost of £15,000 (equivalent to £1,090,000 in 2018).2018 Among the 'improvements' carried out, the ruined but still largely intact aisled medieval nave was demolished and a new narrow nave without pillars built on its site. In the 17th Century Dornoch ceased to be the seat of the Bishops of Caithness due to abolishment of the episcopate in the Church of Scotland, but the name has remained due this historical association.

On 30 September 1866, the Duke and Duchess of Sutherland were present to welcome the Prince and Princess of Wales, and the Duke of Edinburgh, who attended the morning service.

The interior was reordered between 1924 and 1926 by Rev. Charles Donald Bentinck, with the removal of Victorian plasterwork to reveal the stonework (although the medieval church would have been plastered throughout). The site of the medieval high altar was raised and converted into a burial area for the Sutherland family, who introduced large marble memorials alien to the original appearance of the building.

In 2010, billionaire entrepreneur Elon Musk and actress Talulah Riley married at Dornoch Cathedral. They divorced in 2012.

All content from Kiddle encyclopedia articles (including the article images and facts) can be freely used under Attribution-ShareAlike license, unless stated otherwise. Cite this article:
Dornoch Cathedral Facts for Kids. Kiddle Encyclopedia.