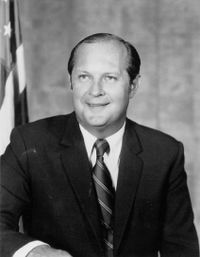 Douglas Michael Costle (July 27, 1939 – January 13, 2019) was an American politician and environmentalist. He was one of the key figures of the creation of the United States Environmental Protection Agency (EPA). He would later become EPA Administrator from 1977 to 1981 during the Jimmy Carter presidency.

Costle was born in Long Beach, California. He studied at Harvard University and at the University of Chicago. Costle died on January 13, 2019 in McLean, Virginia from complications of a stroke, aged 79.

All content from Kiddle encyclopedia articles (including the article images and facts) can be freely used under Attribution-ShareAlike license, unless stated otherwise. Cite this article:
Douglas M. Costle Facts for Kids. Kiddle Encyclopedia.