Downhill is a small village and townland near Castlerock in County Londonderry, Northern Ireland. It is situated within Causeway Coast and Glens district. It was visited by the Lewis brothers (Warren and C. S. Lewis) in their childhood, when, in July 1901, their nurse took them for a visit while on a vacation in Castlerock. 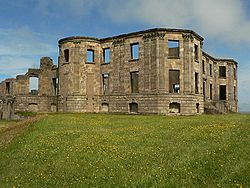 The area Downhill resides was formerly called Dunbo, derived from the Irish dún Bó, meaning "fort of the cows".

Started in 1776, Downhill was the romantic vision of Frederick Hervey, 4th Earl of Bristol and Bishop of Derry. The Earl Bishop created an elegant country house, called Downhill House, which now lies in ruins, and on the nearby clifftop he built the circular Mussenden Temple as his library, modelled on the Temple of Vesta. It is now a National Trust property.

All content from Kiddle encyclopedia articles (including the article images and facts) can be freely used under Attribution-ShareAlike license, unless stated otherwise. Cite this article:
Downhill, County Londonderry Facts for Kids. Kiddle Encyclopedia.