Castlerock is a seaside village in County Londonderry, Northern Ireland. It is situated five miles west of Coleraine, and is part of Causeway Coast and Glens district. It is very popular with summer tourists, having numerous apartment blocks and two caravan sites. Castlerock Golf Club has both 9-hole and 18-hole links courses bounded by the beach, the River Bann and the Belfast to Derry railway line. The village had a recorded population of 1,287 people in the 2011 census, and has a local football team called Villagers FC. 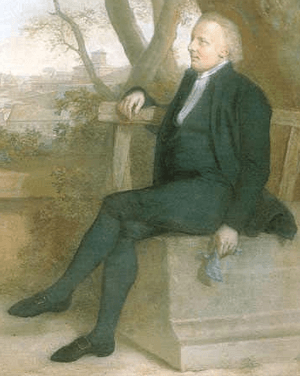 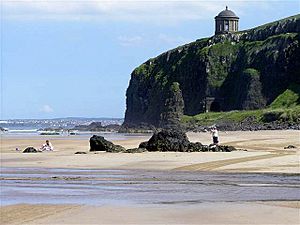 View of Mussenden Temple from the beach

Local historical interest is concentrated on the 18th century Bishop of Derry's ruined palace, the Mussenden Temple on the clifftop, and the Black Glen set within the Downhill Estate, which is now owned by the National Trust. The palace and estate were created by Frederick Hervey, 4th Earl of Bristol who was the Bishop of Derry in the 1780s. The Mussenden Temple, with its precarious perch on the basalt cliff edge is one of the most photographed scenes in Ireland.

The 17th century Hezlett House is a thatched cottage with a cruck structure and is situated at the crossroads near the village. Built around 1691, it was originally a rectory or farmhouse. Also at the adjacent crossroads is an ancient tree.

Castlerock is classified as a village by the Northern Ireland Statistics and Research Agency (NISRA) (i.e. with population between 1,000 and 2,250 people). On Census day (29 April 2001) there were 1,326 people living in Castlerock. Of these:

Castlerock railway station opened on 18 July 1853. Northern Ireland Railways currently run a mostly hourly service in both directions (west to Londonderry Waterside or east to Coleraine and onward to Belfast Lanyon Place and Belfast Great Victoria Street) daily, and only five trains each way on Sunday. Ulsterbus services tend to coincide roughly with the times of the railway service and proceed either west towards Limavady or east to Coleraine.

Castlerock is home to Guysmere Summer Camp, which is owned and run by the Presbyterian Church.

The actor James Nesbitt lived in Castlerock as a teenager.

The village was a holiday destination for the famous author C. S. Lewis. Born in Belfast, he holidayed in Castlerock as a child and took inspiration from Downhill House for some of his books including The Lion, the Witch and the Wardrobe.

All content from Kiddle encyclopedia articles (including the article images and facts) can be freely used under Attribution-ShareAlike license, unless stated otherwise. Cite this article:
Castlerock Facts for Kids. Kiddle Encyclopedia.