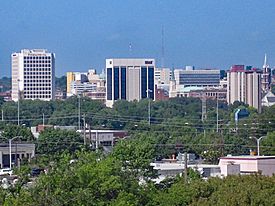 Downtown Macon refers to the largest financial district for the city of Macon, Georgia, United States. It is home to many museums, ranging from the Georgia Sports Hall of Fame to the Tubman African American Museum. Numerous Antebellum homes are located in Downtown Macon, including the Woodruff House, the Hay House, and the Cannonball House. The most notable church in downtown Macon is Mulberry Street United Methodist Church, the oldest Methodist Church in the state of Georgia. Terminal Station (Macon, Georgia), was built in 1916.

Some notable buildings in Downtown Macon are:

The biggest tourist attraction in downtown Macon is the annual Cherry Blossom Festival, but there are also many other smaller attractions, such as the many museums (mentioned above), and also small parades for holidays such as Thanksgiving and Christmas.

All content from Kiddle encyclopedia articles (including the article images and facts) can be freely used under Attribution-ShareAlike license, unless stated otherwise. Cite this article:
Downtown Macon, Georgia Facts for Kids. Kiddle Encyclopedia.