The downy woodpecker (Dryobates pubescens) is a species of woodpecker, the smallest in North America.

Despite their close resemblance, the downy and hairy woodpeckers are not very closely related; the outward similarity is an example of convergent evolution. Why they evolved this way cannot be explained with confidence; it may be relevant that the species exploit rather different-sized foodstuffs and do not compete very much ecologically. 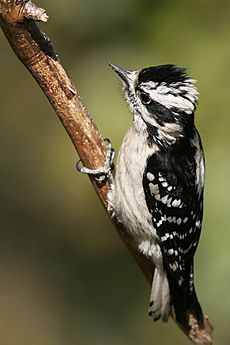 The downy woodpecker gives a number of vocalizations, including a short pik call. One may identify the woodpecker by pik-call, counting half a second between piks (a total of four must be heard). The rattle-call is a short burst that sounds similar to a bouncing ball, while that of the Hairy Woodpecker is a shorter burst of the same amplitude. Like other woodpeckers, it also produces a drumming sound(sounds like four taps )with its beak as it pecks into trees. Compared to other North American species its drums are slow.

Downy woodpeckers are native to forested areas, mainly deciduous, of North America. Their range consists of most of the United States and Canada, except for the deserts of the southwest and the tundra of the north. Mostly permanent residents, northern birds may migrate further south; birds in mountainous areas may move to lower elevations.

Downy woodpeckers nest in a tree cavity excavated by the nesting pair in a dead tree or limb. In the winter, they roost in tree cavities. Downy Woodpeckers forage on trees, picking the bark surface in summer and digging deeper in winter. They mainly eat insects, also seeds and berries. They are a natural predator of the European corn borer, a moth that costs the US agriculture industry more than $1 billion annually in crop losses and population control. In winter, especially, downy woodpeckers can often be found in suburban backyards with mature trees. There, they may feed on suet and shelled peanuts provided by mesh birdfeeders.

All content from Kiddle encyclopedia articles (including the article images and facts) can be freely used under Attribution-ShareAlike license, unless stated otherwise. Cite this article:
Downy woodpecker Facts for Kids. Kiddle Encyclopedia.