Dr. Juan A. Rivero Zoo (sometimes called Mayagüez Zoo) is a 45-acre (18 ha) zoo located in Mayagüez, Puerto Rico. It is the largest zoo on the island. It is named in honor of Juan A. Rivero, its first director. It has an extensive collection of animals from all continents. The premises of the zoo have remained closed to the general public following the passing of Hurricane Maria over Puerto Rico in September 2017. Two lion cubs were born at the zoo in 2019.

The zoo was originally opened in 1954, when legislator Benjamin Cole authored the law that created the zoo. Starting in 2003 the zoo went through a major upgrade with the addition of the aviary, arthropodary and a butterfly exhibition.

On March 2008 the zoo acquired two new giraffes and two desert warthogs to augment the African collection. The animals were brought from Ohio and Louisiana. The economic crisis related to the government debt crisis in Puerto Rico, which began in 2014, led to issues with zoo maintenance and animal care.

Despite the zoo being closed to the public after the passing of Hurricane Maria in September 2017, the zoo still has animals with workers caring for them, and two heathy lion cubs were born at the zoo in 2019. 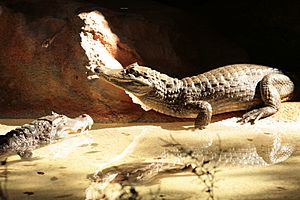 Caimans at the caiman exhibit.

Within the last ten years alone, the zoo had been cited for several violations of inhumane killings, including a puma, coatimundi, and a baboon that were "not fit for exhibition". Two guinea pigs on exhibition were fed alive to reptiles, and deer on exhibition were fed to big cats after having their jugulars cut without using a humane slaughter method. There were also accounts of the zoo using expired medications and having inadequate vet care. The United States Department of Agriculture investigated the zoo, and has not renewed the zoo's federal permits.

Committed to animal welfare, especially those facing extinction, the zoo has several conservations programs for the following species: 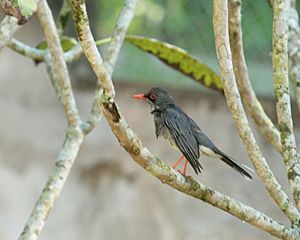 After the passing of Hurricane Maria the zoo with the following facilities remained closed to the general public:

In an effort to promote conservation, the Dr. Rivero Zoo has started an adoption program in which citizens can "adopt" one of the zoo's animals, and donate to contribute in conservation efforts.

All content from Kiddle encyclopedia articles (including the article images and facts) can be freely used under Attribution-ShareAlike license, unless stated otherwise. Cite this article:
Dr. Juan A. Rivero Zoo Facts for Kids. Kiddle Encyclopedia.