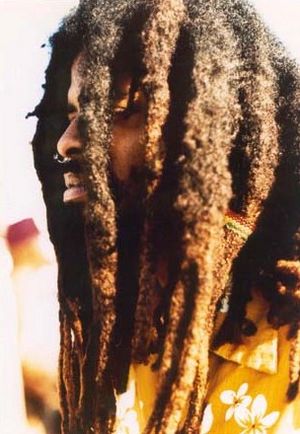 Dreadlocks, also called locks or dreads, are coils of hair which are made by themselves, in all hair types, if the hair is allowed to grow naturally without grooming for a long time. They are part of some religions, like the Rastafarian religion in Jamaica. People who do not have to have dreadlocks because of their religion sometimes have dreadlocks as well. A lot of them do not let their dreads form naturally, but make dreadlocks themselves. There are different ways in which people help their hair go together to form dreadlocks. Backcombing, braiding, and twisting are some of the different techniques used to form dreadlocks.

All content from Kiddle encyclopedia articles (including the article images and facts) can be freely used under Attribution-ShareAlike license, unless stated otherwise. Cite this article:
Dreadlocks Facts for Kids. Kiddle Encyclopedia.