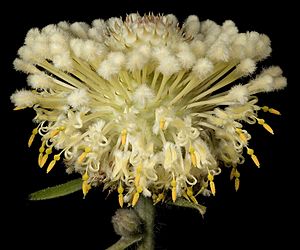 Isopogon sphaerocephalus, commonly known as drumstick isopogon or Lesueur isopogon, is a species of plant in the family Proteaceae and is endemic to the south-west of Western Australia. It is a shrub with linear to narrow egg-shaped leaves and spherical heads of hairy white to creamy yellow flowers.

Isopogon sphaerocephalus was first formally described by botanist John Lindley in A sketch of the vegetation of the Swan River Colony in 1839.

In 2019, Barbara Lynette Rye described two subspecies of I. sphaerocephalus in the journal Nuytsia but the names have not been assessed by the Australian Plant Census as at November 2020:

The specific epithet (sphaerocephalus) means "spherical-headed", and lesueurensis refers to Mount Lesueur, where this subspecies occurs.

Subspecies sphaerocephalus grows in Jarrah forest between Gidgegannup, the Scott River area and the Kent River in the Jarrah Forest, Mallee, Swan Coastal Plain and Warren biogeographic regions. Subspecies lesueurensis grows in shrubland on and near the sides and bases of hills in the Mount Lesueur area.

Both subspecies of I. sphaerocephalus are listed as "not threatened" by the Western Australian Government Department of Parks and Wildlife.

All content from Kiddle encyclopedia articles (including the article images and facts) can be freely used under Attribution-ShareAlike license, unless stated otherwise. Cite this article:
Drumstick isopogon Facts for Kids. Kiddle Encyclopedia.