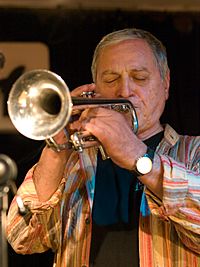 Duško Gojković (Serbian Cyrillic: Душко Гојковић; born 14 October 1931) is a Serbian jazz trumpeter, composer, and arranger. He was born in Jajce, Kingdom of Yugoslavia. His career began in the 1950s. In these years he played with Chet Baker, Stan Getz, and Oscar Pettiford. In 1958 he performed at Newport Jazz Festival. He worked with the Kenny Clarke/Francy Boland Big Band from 1968–1973.

All content from Kiddle encyclopedia articles (including the article images and facts) can be freely used under Attribution-ShareAlike license, unless stated otherwise. Cite this article:
Duško Gojković Facts for Kids. Kiddle Encyclopedia.