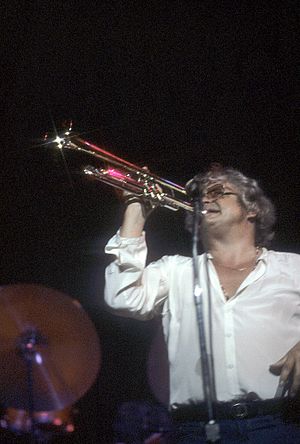 Maynard Ferguson (May 4, 1928 – August 23, 2006) was a Canadian jazz musician and bandleader. He was born in Verdun, Quebec. He came to prominence playing in Stan Kenton's orchestra, before forming his own band in 1957. He was noted for being able to play accurately in a remarkably high register, and for his bands, which served as stepping stones for up-and-coming talent. He died in Ventura, California.

All content from Kiddle encyclopedia articles (including the article images and facts) can be freely used under Attribution-ShareAlike license, unless stated otherwise. Cite this article:
Maynard Ferguson Facts for Kids. Kiddle Encyclopedia.