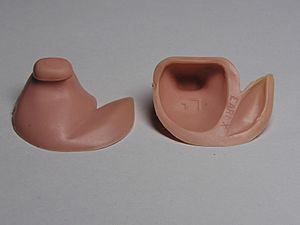 Ear plugs are made using many different materials to be used for different reasons.

Ear plugs are also made to be re-used or disposable.

Disposable foam earplugs: with coins for scale (top) and inserted into the wearer's ear.

This kind of earplug protection is often worn by industrial workers who work within hearing distance of loud machinery for long periods, and is used by the British Ministry of Defense (MoD) for soldiers to use when firing weapons. Earplugs are rated for their ability to reduce noise. In the United States, the U.S. Environmental Protection Agency mandates that hearing protection is rated and labeled. To be rated hearing protection is tested under ANSI S3.19-1974 to provide a range of attenuation values at each frequency that can then be used to calculate a Noise Reduction Rating (NRR). Under this standard a panel of ten subjects are tested three times each in a laboratory to determine the attenuation over a range of 9 frequencies. In the European Union, hearing protectors are required to be tested according to the International Organization for Standardization (ISO) acoustical testing standard, ISO 4869 Part 1 and the Single Number Rating (SNR) or High/Middle/Low (HML) ratings are calculated according to ISO 4869 Part 2. In Brazil, hearing protectors are tested according to the American National Standards Institute ANSI S12.6-1997 and are rated using the Noise Reduction Rating Subject Fit NRR(SF). Australia and New Zealand have different standards for protector ratings yielding a quantity SLC80 (Sound Level Class for the 80th percentile). Canada implements a class system for rating the performance of protectors. Gauger and Berger have reviewed the merits of several different rating methods and developed a rating system that is the basis of a new American National Standard, ANSI S12.68-2007 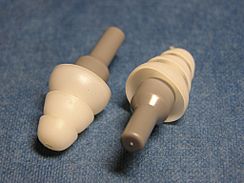 Musicians' earplugs. The grey end caps contain an acoustic transmission line with a damper (attenuator) at the end while the domed flanges form a seal in outer part of the ear canal. The output port can just be seen as a small hole at the near end of the left plug

Musicians are exposed to potentially harmful levels of sound, which can lead to hearing loss, tinnitus, and other auditory symptoms. Because of this, musicians may choose to use earplugs. There are multiple types of earplug that a musician may choose from depending on the type of music, instruments being used, and the number of performers. Depending on their type of instrument, musicians may choose to use preformed earplugs, custom earplugs, custom in-ear monitors, foam earplugs, or level-dependent. 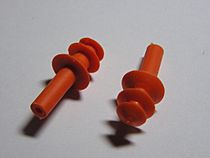 Earplugs made from silicone rubber. The hole seen in the left plug is the input port and extends as far as the central flange where the attenuation occurs

Musician's earplugs are designed to attenuate sounds evenly across all frequencies (pitches) which helps maintain the ear's natural frequency response and thus minimizes the effect on the user's perception of bass and treble levels. These are commonly used by musicians and technicians, both in the studio and in concert, to avoid overexposure to high volume levels. Musician's earplugs generally achieve this by incorporating a tiny diaphragm to reduce low frequencies, together with absorbent or damping material for high frequencies. These earplugs are not intended for protection from very high noise levels (beyond 105 dB). Preformed earplugs, such as the ER-20 earplug are universal (non-custom) earplugs with a noise reduction rating (NRR) of about 12 dB. A more expensive option is the custom musician's earplug, which is custom-made for the individual listener. These earplugs are typically made out of silicone or vinyl materials and come with a vent and a variety of filters that can change the amount of attenuation provided. Common filter attenuations are 9, 15, and 25 dB, and with these filters, the musician can adjust their earplugs depending on the music they are playing. In order to have custom musicians' earplugs made, an audiologist administers a hearing test and makes molds of the ear. A company then makes a custom ear-piece into which the different filters may be inserted. These types of earplugs will provide the flattest attenuation and the truest isolation from outside noise, as they fit firmly into the individual's ears. They also provide much better protection from very high noise levels. This type of plug is quite popular amongst audio engineers who can safely listen to loud mixes for extended periods of time. However, they can be quite costly, being intended for constant re-use unlike simple earplugs which are disposable. 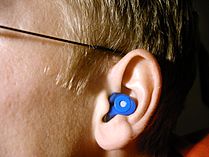 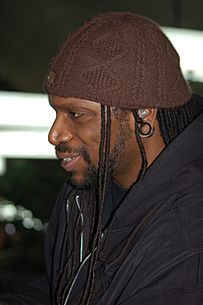 Alternately, musicians may use in-ear monitors, which are essentially headphones that also serve as earplugs by attenuating surrounding sound. In order for in-ear monitors to double up as hearing protection, custom earpieces should be used. The process for having custom earpieces made is similar to that or the custom musician's earplug and, similarly, the earpiece will be made of silicone or vinyl. While using an in-ear monitor can help protect hearing, the amount of protection provided by the monitor depends on the listening level that the musician chooses. Because of this, if the musician sets the monitor to a high level, the monitor may attenuate surrounding sound while still providing a potentially harmful level of sound directly to the musician's ear and therefore no longer serve a protective function.

Although not by definition a musician's earplug, foam and level-dependent earplugs also may be used. These types of earplug do not provide the flat attenuation that is characteristic of a musician's plug, but may be useful for some musicians, such as percussion or timpani players.

In other activities, hobby motorcyclists and skiers may also choose to use decibel reduction earplugs, to compensate for the ongoing noise of the wind against their head or helmet.

The noise reduction of passive earplugs varies with frequency but is independent of value (soft noises are reduced as much as loud noises). As a result, while loud noises are softened, protecting hearing, it is difficult to hear soft noises. Active electronic earplugs exist, where loud noises are reduced more than soft noises, and soft sounds may even be amplified, providing dynamic range compression. This is done by having a standard passive earplug, together with a microphone/speaker pair (microphone on outside, speaker on inside; formally a pair of transducers), so sound can be transmitted without being attenuated by the earplug. This protects hearing, but allows one to hear normally when sounds are in safe ranges – for example, have a normal conversation when there are no noises, but be protected from sudden loud noises, or hear soft passages in music but be protected from sudden sounds like cymbal crashes.

Earplugs are also available which help to protect ears from the pain caused by airplane cabin pressure changes. Some products contain a porous ceramic insert which reportedly aids equalization of air pressure between the middle and outer ear thereby preventing pain during landings and take-offs. Some airlines distribute regular foam earplugs as part of their amenity kits for passengers to aid their comfort during landings and takeoffs as well as to reduce exposure to the aircraft's noise during the flight. These can help passengers get to sleep during the flight if desired.

Earplugs for sleeping are made to be as comfortable as possible while blocking external sounds that may prevent or disrupt sleep. Specialized earplugs for such noises as a partner's snoring may have sound-dampening enhancements that enable the user to still hear other noises, such as an alarm clock.

To determine the comfort of earplugs used for sleeping, it is important to try them on while actually lying down. The pressure on the ear between the head and pillow may cause significant discomfort. Furthermore, just tilting the head back or to the side causes significant anatomical changes in the ear canal, mostly a reduction of the ear canal diameter, which may reduce comfort if the earplug is too large.

All content from Kiddle encyclopedia articles (including the article images and facts) can be freely used under Attribution-ShareAlike license, unless stated otherwise. Cite this article:
Earplug Facts for Kids. Kiddle Encyclopedia.