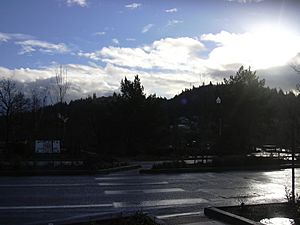 The East Buttes are made up of several extinct volcanoes in and around Gresham, Oregon, United States, which are part of the Boring Lava Field. The Boring Lava Field became active at least 2.7 million years ago, and has been extinct for about 300,000 years. 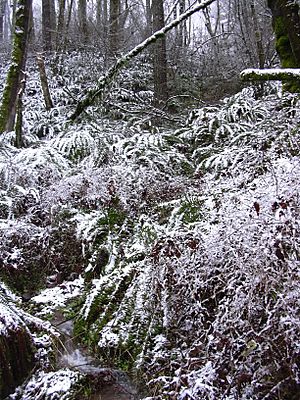 The Gresham Butte Saddle Trail runs through open space owned by Metro and the City of Gresham. The trail was previously a logging road and is bordered on the north by Gresham Butte and on the south by Towle Butte and Gabbert Hill. Several tributaries of Johnson Creek are located in this open space. The land in this area is dominated by black cottonwood, red alder, and Douglas-fir. There are also many non-native species present, such as Himalayan blackberry and European holly, a large stand of which is found around the middle of Saddle Trail. Somewhere in the forest is an old bus used to move water pipes for the planned Mount Hood Freeway. The project and the bus were abandoned in the 1970s after a mass public outcry against the proposed freeway.

Much of the land on Gabbert Hill was previously designated for a subdivision called Darby Ridge, but was acquired by Metro and the City of Gresham in 2007.

All content from Kiddle encyclopedia articles (including the article images and facts) can be freely used under Attribution-ShareAlike license, unless stated otherwise. Cite this article:
East Buttes Facts for Kids. Kiddle Encyclopedia.