George P. Perkins, a representative of a New York lumber firm, began this place in 1862. It was incorporated as a village in 1887 and as a city in 1895. The adjacent community of Tawas Beach was annexed into East Tawas in 1922.

There were 1,332 households of which 21.4% had children under the age of 18 living with them, 42.6% were married couples living together, 10.1% had a female householder with no husband present, 4.1% had a male householder with no wife present, and 43.2% were non-families. 38.9% of all households were made up of individuals and 20.4% had someone living alone who was 65 years of age or older. The average household size was 2.06 and the average family size was 2.70.

There were 1,382 households out of which 23.7% had children under the age of 18 living with them, 47.1% were married couples living together, 9.1% had a female householder with no husband present, and 41.0% were non-families. 37.7% of all households were made up of individuals and 23.0% had someone living alone who was 65 years of age or older. The average household size was 2.14 and the average family size was 2.79. 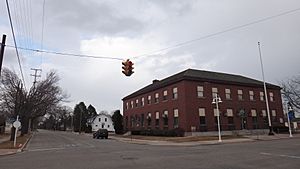 Although a small city, East Tawas has a very lively downtown area. The main downtown area is generally defined as the six-block area between Sawyer, Lincoln, Bay, and Main Street, with Newman Street serving as the main thoroughfare. Downtown East Tawas is home to many small shops, restaurants, and bars, as well as a movie theater. 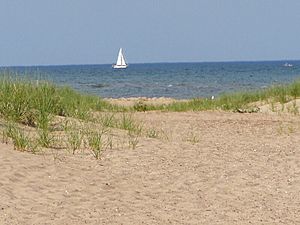 The city is on Tawas Bay, and Tawas Point State Park is nearby, which is considered to be an especially good locale for birding.

The Tawas Point Light is located there.

One of the main Winter attractions in the Tawases is known as Perchville USA. When winter freezes Tawas Bay each year, hundreds of perch fisherman move fishing shanties onto the bay's ice, making Perchville USA, the largest non-land community festival in Northeast Michigan. Perchville was created by a Harold Gould, a local druggist. Today it is organized by the local Chamber of Commerce. This celebration was created to draw tourism to the town for ice fishing. Visitors would be able to rent ice shanties, which were set up on the ice in the form of a town. Perchville's annual Chili Cookoff Competition began eighteen years ago, and is still one of the main attractions to this day. One of the most popular events at Perchville is the Polar Bear Swim. This year (2012) marked the 62nd annual Perchville USA. Silver Valley Winter Sports Festival was originally combined with Perchville, but the former was discontinued.

Near the center of East Tawas you will find Newman Street. Newman Street offers many activities and is where many local businesses are situated, such as the Tawas Bay Movie Theater, Ben Franklin, the Village Chocolatier, Mr. Jack’ss, Wingin’ It, Branham’s Jewelry, Tawas Community Center, and many others. These businesses contribute to the economy of the city. They also support the local area schools. During summer, Newman Street hosts many street festivals. One of the most popular festivals is Tuesday Night Live, where a band plays as people dance in the street. Also, during Tawas’ annual Summerfest, a car show and street dance is held on Newman Street. Amid the Summerfest, the street hosts a 1 and 5 mile run, plus a kid’s bike and animal parade. Newman Street is full of cultural and fun activities.

All content from Kiddle encyclopedia articles (including the article images and facts) can be freely used under Attribution-ShareAlike license, unless stated otherwise. Cite this article:
East Tawas, Michigan Facts for Kids. Kiddle Encyclopedia.