East Wallabi Island is an island in the Wallabi Group of the Houtman Abrolhos, located in the Indian Ocean off the west coast of mainland Australia.

In the context of the Batavia mutiny and massacre, East Wallabi Island is often referred to as "High island". This was the name given it in contemporary sources, and was used by historians for as long as it remained a lost toponym. 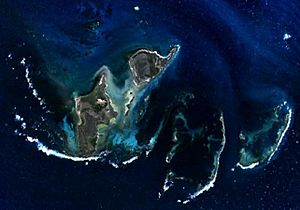 There are two named hills on the island. Flag Hill is located in the north-east of the island, at the foot of Fish Point; at 15 metres (49 ft), it is the highest point in the Houtman Abrolhos. In the south-east is another hill, named Eagle Hill. Other named localities include Fish Point and, on the point's western side, Turtle Bay. Immediately to the west of Flag Hill is an airstrip.

The island is surrounded by submerged coral reef. This is narrow along the west, north and east shores, giving way to open ocean to the west and north. Beyond the reef on the east side of the island lies Pigeon Island Anchorage, the main passage and anchorage for Pigeon Island, a small island 1 kilometre (0.62 mi) to the south that is used as a seasonal camp for the Western Rock Lobster fishery. To the south, the reef is extensive, and much of it is high enough that a person may wade from island to island; islands connected to East Wallabi Island in this way include Barge Rock, Turnstone Island, Seagull Island, Oystercatcher Island and West Wallabi Island.

The basement of East Wallabi Island is the Wallabi Limestone, a dense calcretised, coral limestone platform that underlies the entire Wallabi Group. This platform, which arises abruptly from a flat shelf, is about 40 metres (130 ft) thick, and is of Quaternary origin. Reef that formed during the Eemian interglacial (about 125,000 years ago), when sea levels were higher than at present, are now emergent in places, and constitute the basement of the group's central platform islands, which include East Wallabi Island.

The basement is capped by aeolianite. This ranges from one to three metres (3 ft 3 in to 9 ft 10 in) thick, and forms an almost continuous pavement on the western half of the island. The aeolianite is in turn overlain by sand dunes. These are discontinuous in western and northern parts of the island, but in the south-west and east they are extensive and consolidated.

As one of the few islands in the Houtman Abrolhos large enough to support dune systems, East Wallabi Island supports a relatively high diversity of plant life. Both the dunes and the pavement limestone support species-rich vegetation complexes dominated by chenopod shrubs, and these communities have been identified as having species conservation importance, because they are so diverse, yet so easily disturbed and so slow to recover.

According to a survey published in 2001, 124 plant species occur on East Wallabi Island, the most of any island in the archipelago:

The island is part of the Houtman Abrolhos Important Bird Area, identified as such by BirdLife International because of its importance for supporting large numbers of breeding seabirds.

All content from Kiddle encyclopedia articles (including the article images and facts) can be freely used under Attribution-ShareAlike license, unless stated otherwise. Cite this article:
East Wallabi Island Facts for Kids. Kiddle Encyclopedia.