Eastwood is a neighborhood in the east of Syracuse, New York, United States.

Eastwood was originally a village, and as a suburb of Syracuse, was named for its easterly direction from that place. The neighborhood was part of the last round of annexations by the City of Syracuse, in 1928. Today the neighborhood still has a strong sense of community, and its nickname is "the village within the city." 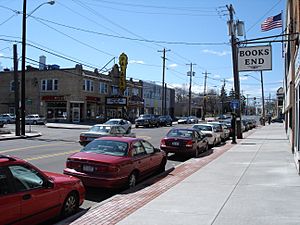 Eastwood's main retail corridor is along James Street, which still boasts a village-like atmosphere that residents are working to preserve.

The Eastwood Neighborhood Planning Group worked to amend the Zoning Rules and Regulations of the City of Syracuse to require neighborhood approval to any changes to the building structures along James Street.

The neighborhood is also home to the Palace Theatre completed in 1924. It has recently been restored and serves as not only a movie theatre but also as a facility for the community.

The Eastwood community is very open to the restoration of the neighborhood, and currently has many plans on its future.

All content from Kiddle encyclopedia articles (including the article images and facts) can be freely used under Attribution-ShareAlike license, unless stated otherwise. Cite this article:
Eastwood, Syracuse Facts for Kids. Kiddle Encyclopedia.