East Syracuse is an incorporated village and a suburb of the City of Syracuse in eastern Onondaga County, New York. United States. As of the 2010 U.S. census, the village had a population of 3,084. It is located immediately east of Syracuse, in the town of DeWitt.

According to the United States Census Bureau, the village has a total area of 1.6 square miles (4.1 km2), all of it land.

There were 1,393 households out of which 30.1% had children under the age of 18 living with them, 30.1% were married couples living together, 15.8% had a female householder with no husband present, and 46.7% were non-families. 40.2% of all households were made up of individuals and 16.8% had someone living alone who was 65 years of age or older. The average household size was 2.28 and the average family size was 3.09.

The original inhabitants of the area were Onondaga clans, whose village was atop a hill on the eastern border of Onondaga territory along what is now Kinne St. An established trail ran down part of what is now James Street to Ley Creek where the Onondagas could travel by canoe to their capital along the northeast shore of Onondaga Lake. Portions of this Onondaga village dating from the early eighteenth century were uncovered in the 1930s when East Syracuse High School was being built on Kinne St near James St.

The current settlement, originally named "Messina," grew up along the northern edge of the Erie Canal across from Headson's Landing, a busy canal port with the only bridge to cross the canal east of downtown Syracuse for ten miles. In the middle of the nineteenth century the Messina Plank Road (now New York State Route 290) was built from Messina east to Manlius Center and the canal port there. Large venetian blind and buggy whip factories operated in Messina in the late nineteenth century. 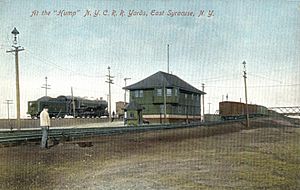 In the 1870s, the main line of the New York Central Railroad was built through the northern part of Messina. The DeWitt Railyards complex, one of the busiest in the world in its day, stretched from Messina five miles east to Minoa. East and westbound trains were assembled in the yards at the "Hump", where trains were pushed up tracks on one side of an artificial hill and routed to their train by track switches as the rolled freely down the far side. During most of the nineteenth century the larger part of the hamlet was south of the railroad yards, but as the population grew with rail workers, housing expanded to the north.

During the boom following construction of the railroad, the name "East Syracuse" began to replace Messina. That name was chosen for the new village when it was incorporated in 1881. At that time the village thrived due to its access to transportation. The railroad was the new powerhouse, but the canal remained viable, with Headson's Landing still a busy port. The northeastern corner of the Headson's Landing Bridge was the original southwestern corner of the village.

In the 20th century, Erie Boulevard was built over the canal from west of Syracuse to about a mile past Headson's landing. In the 1960s, Interstate 690 was built through the southern part of the village between the railroad and Erie Blvd. Now only a small portion of the original settlement south of the railroad remains, including about 100 of the village's 1400 dwelling units.

With the canal gone and the railroad seeing only a portion of its former business, and as the interstate system and other high speed roads have turned the all-day trip of the nineteenth century into a few hours' drive, East Syracuse has become fully a suburb of Syracuse.

East Syracuse is home to Bristol Laboratories, formerly Cheplin Laboratories, which Bristol-Myers purchaced in 1943 and converted from the production of acidophilus milk to penicillin until 2005 when it became more economical to produce overseas. Now a division of Bristol-Myers Squibb, the facility makes several newer drugs, along with housing a state-of-the-art ramp-up facility designed to quickly adapt to make moderate quantities of new drugs for clinical trials.

East Syracuse played another role in making the world a little bit smaller in 1996, when village trustee Jason M Rhoades, a twenty-year-old college student and management intern at NYNEX (now Verizon), made history by being the first legislator in the world to participate in a legislative meeting by telecom from a business trip in Massachusetts. Rhoades was also the village's youngest Trustee when elected in 1995 at the age of nineteen, and one of the youngest people ever elected to any municipal office in New York State. In 2001, he became the village's youngest mayor at the age of twenty-five.

A recent list of the mayors of East Syracuse (with party affiliation) includes:

All content from Kiddle encyclopedia articles (including the article images and facts) can be freely used under Attribution-ShareAlike license, unless stated otherwise. Cite this article:
East Syracuse, New York Facts for Kids. Kiddle Encyclopedia.