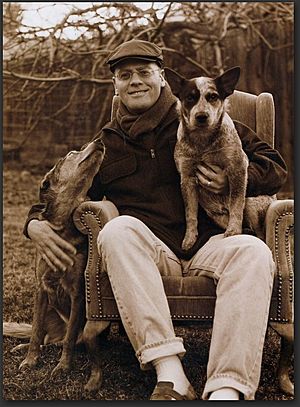 Ed Ross with his pets Beijo and Max

Michael Edward "Ed" Ross (October 27, 1965 – July 30, 2016) was an American tintype photographer and lawyer. He was born in Ukiah, California and raised in Davis, California.

His photography work spanned 27 years. His last six years were devoted exclusively to wet-plate photography. His primarily focused on portraits and landscape photography.

Ross died on July 30, 2016, in a motorcycle accident on a mountain road near Yosemite National Park while on his way to photograph one of his favorite subjects, the Half Dome in Yosemite Valley.

All content from Kiddle encyclopedia articles (including the article images and facts) can be freely used under Attribution-ShareAlike license, unless stated otherwise. Cite this article:
Ed Ross Facts for Kids. Kiddle Encyclopedia.