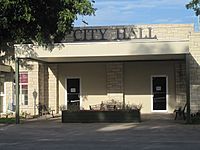 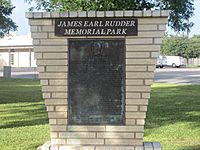 Eden is a city in Concho County, Texas, United States. The population was 2,766 at the 2010 census. About half of the population consists of inmates housed at the Eden Detention Center, a for-profit prison operated by Corrections Corporation of America under contract with the Federal Bureau of Prisons.

Eden is located at the intersection of U.S. Highway 83, which extends north to Abilene and south to Junction, and U.S. Highway 87, a link from San Angelo to the northwest and San Antonio to the southeast.

Eden is the birthplace and hometown of James Earl Rudder, a United States Army general in World War II and former president of Texas A&M University in College Station who helped make the university a coeducational institution. The James Earl Rudder Memorial Park is located in the Eden town square across from the city hall and the Don Freeman Memorial Museum. A small green space, it contains a large gazebo and picnic tables.

According to the United States Census Bureau, the city has a total area of 2.4 square miles (6.2 km2), all of it land. 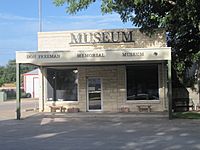 The climate in this area is characterized by hot, humid summers and generally mild to cool winters. According to the Köppen Climate Classification system, Eden has a humid subtropical climate, abbreviated "Cfa" on climate maps.

All content from Kiddle encyclopedia articles (including the article images and facts) can be freely used under Attribution-ShareAlike license, unless stated otherwise. Cite this article:
Eden, Texas Facts for Kids. Kiddle Encyclopedia.