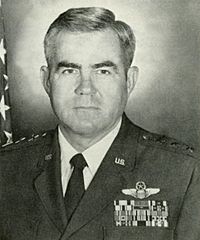 Edgar Starr Harris Jr. (May 14, 1925 – October 13, 2018) was an American Air Force lieutenant general. He was born in Danville, Virginia. His last assignment was commander of Eighth Air Force, Strategic Air Command, with headquarters at Barksdale Air Force Base, Louisiana.

During his over 30 years in the United States Air Force, Harris was also Chief of Staff and Vice Commander in Chief of the Strategic Air Command, where he spent most of his time during his service.

All content from Kiddle encyclopedia articles (including the article images and facts) can be freely used under Attribution-ShareAlike license, unless stated otherwise. Cite this article:
Edgar S. Harris Jr. Facts for Kids. Kiddle Encyclopedia.