Edge of the Trees facts for kids

Edge of the Trees is a collaborative installation artwork created by artist Janet Laurence and Fiona Foley. The artwork is a site-specific piece located at the forecourt of the Museum of Sydney, Sydney since its opening in 1995. The artwork is constructed with 29 vertical pillars made from different materials such as wood, steel, and sandstone collaborating with other organic materials and sound elements. This public art installation has won several awards as it evokes the cultural and physical history of the site. 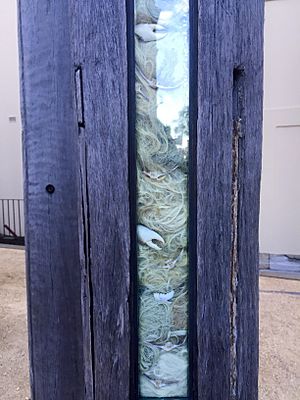 Close up of organic materials such as hair, shell, bone, and feathers embedded in windows of timber pillar 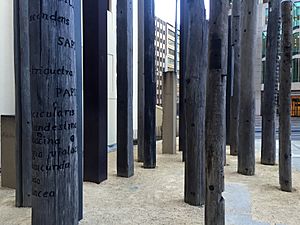 Edge of the Trees is a "forest" of 29 massive pillars made of wood, steel and sandstone clustering at the museum forecourt near the entrance. Wooden pillars points to the grove of trees that once occupied the site. The pillars were Ironbark and Tallow wood trees which were collected from around Sydney. The sandstone material is to suggest Sydney's historical building material and the substance on which Sydney is built. Steel is used to link to the steel and glass features of the museum architecture, extending the building and reflecting upon the industrial developments since the colonial period.

Organic materials such as human hair, shell, bone, feathers, ash and honey, are embedded in windows within the wood pillars, symbolising and memorialising the lives that lived around the site. Natural and cultural histories are evoked by the names of botanical species carved or burnt into wooden columns in both Latin and Aboriginal languages, along with the signatures of First Fleeters.

Words are engraved onto the pillars such as the species from pollen readings of the Governor's garden and the names of the first fleeters who arrived in Sydney in 1788. Place names are also engraved on the sandstone pillars in Latin and Aboriginal languages.

The 29 vertical poles correspond to the 29 Aboriginal clans from around Sydney. As the work is designed not to be viewed from a distance but experienced up close as part of the sensual and spatial encounter, the audience are invited to touch and run their fingers along the engraved names and to feel the textures of the different materials. Walking between the pillars you hear a soundscape of Koori voices reciting the names of places in the Sydney region that have today been swallowed up by the metropolis. This is also a way to celebrate the moment in time.

All content from Kiddle encyclopedia articles (including the article images and facts) can be freely used under Attribution-ShareAlike license, unless stated otherwise. Cite this article:
Edge of the Trees Facts for Kids. Kiddle Encyclopedia.