Edgewater is a neighborhood in Miami, Florida, United States, located north of Downtown and Omni, and south of the Upper East Side. It roughly bound by North 17th Street to the south, North 37th Street to the north, the Florida East Coast Railway and East First Avenue to the west and Biscayne Bay to the east. 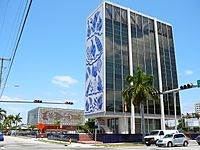 The Bacardi Building on NE 21 St and Biscayne Blvd, is a landmark building in Edgewater, built in the MiMo style 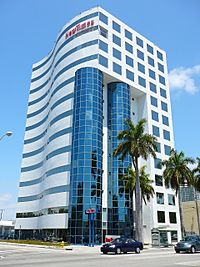 All content from Kiddle encyclopedia articles (including the article images and facts) can be freely used under Attribution-ShareAlike license, unless stated otherwise. Cite this article:
Edgewater (Miami) Facts for Kids. Kiddle Encyclopedia.