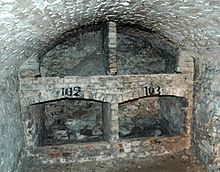 One of the vaults used as storage space

The Edinburgh Vaults or South Bridge Vaults are a series of chambers formed in the nineteen arches of the South Bridge in Edinburgh, Scotland, which was completed in 1788. For around 30 years, the vaults were used to house taverns, workshops for cobblers and other tradesmen, as well as storage space for said merchants.

As the conditions in the vaults deteriorated, mainly because of damp and poor air quality, the businesses left in the 1820s and the very poorest of Edinburgh's citizens moved in, though by around 1860, even they are believed to have left too. That people had lived there was only discovered in 1985 during an excavation, when middens were found containing toys, medicine bottles, plates, and other signs of human habitation.

Edinburgh was a growing community in the late 18th century and two bridges were built to facilitate the expansion, North Bridge and South Bridge, known locally as 'The Bridges'. The South Bridge, built to span the Cowgate gorge between High Street and the growing University of Edinburgh on the Southside, was first proposed in 1775, although work did not begin until August 1785.

Edinburgh's South Bridge should be regarded as more than a simple crossing from Old Town to Southside. It was, in fact, Edinburgh's first purpose-built shopping street, and as such as much space as possible was utilised. The bridge itself is a nineteen arch viaduct, although only one arch is visible today, the 'Cowgate arch.' The remaining eighteen arches were enclosed behind tenement buildings built to allow the area to serve as a commercial district. The hidden arches of the bridge were then given extra floors to allow their use for industry. In total there are approximately 120 rooms or 'vaults' beneath the surface of the South Bridge, ranging in size from two metres squared to forty metres squared. South Bridge officially opened for business on 1 March 1788. 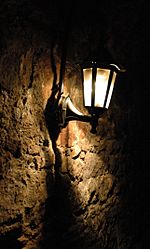 The vault rooms, used as storage space and workshops for the South Bridge businesses, operated as intended for a relatively short space of time. Construction of the bridge had been rushed and the surface was never sealed against water. The vaults began to flood. Abandonment of the vaults began as early as 1795. With the vaults being gradually abandoned by the businesses on the bridge, the empty rooms were adopted and adapted by new users. As the industrial revolution took hold of Britain, the Cowgate area had developed into Edinburgh's slum. The vaults also served as additional slum housing for the city’s poor. Living conditions were appalling. The rooms were cramped, dark and damp. There was no sunlight, poorly circulated air, no running water, and no sanitation. Many rooms housed families of more than ten people. Crimes, including robbery and murder, soon plagued the Vaults.

It is not known when the vaults complex was closed down, with some suggesting as early as c.1835 and others as late as c.1875. Written records regarding the vaults during their slum use are virtually non-existent. All that is known is that at some point tons of rubble were dumped into the vaults making them inaccessible.

The vaults were rediscovered by former Scottish rugby internationalist, Norrie Rowan, after he found a tunnel leading to them in the 1980s. From this tunnel he helped Romanian rugby player Cristian Raducanu escape the Romanian secret police and seek political asylum weeks before the Romanian Revolution of 1989.

The vaults were excavated by Norrie Rowan and his son Norman Rowan in the 1990s. Hundreds of tonnes of rubble were removed by hand and several interesting artifacts were discovered including thousands of oyster shells, which were part of the staple diet of the Edinburgh working class.

Current uses of the Edinburgh Vaults

The vaults on the North Side of the Cowgate arch form a series of tunnels and vaults and are mainly used for ghost tours. The vaults on the South side of the Cowgate arch form a venue called The Caves and The Rowantree, which hosts private events, weddings, private dining, live music and the occasional club night. There are areas within The Caves that are the building remains of what was Adam Square, that were demolished to make way for the erection of the South Bridge. The original terracotta floor tiles, a hearth stone, and what remains of fireplace, were found in one of the rooms within The Caves whilst it was being excavated. In another room, within The Caves, a well was found.

During the Edinburgh Festival Fringe in August, the vaults that make up The Caves and The Rowantree, along with several normally unused vaults, are transformed into a major festival venue hosting over 60 different shows a day.

The television show Ghost Adventures investigated the vaults and claimed to have numerous encounters with spirits there.

In 2003 the television show Most Haunted also investigated the vaults, claiming spirits was there. Season 3, Episode 3.

In 2009 a BBC TV production team filming a one-off TV special featuring Joe Swash recorded unexplained voices in the vaults during an overnight sleepover by Swash. Swash was the only person in the vaults and did not hear the voices himself at the time of recording, despite the sounds being audible on his own microphone. The voices continued to be heard on the recording for some 20 minutes before abruptly ceasing after what appears to be the sound of children yelling. BBC sound engineers initially thought the sounds may be explained by voices drifting into the tunnels from nightclubs nearby but this was found to be incorrect and no logical explanation could be found although they may well have been weak radio signals being picked up by the BBC microphones. The recordings were broadcast as part of the finished program Joe Swash Believes in Ghosts on BBC Three in January 2010.

As of 2015, most of the whole area is now closed to the public, and access is strictly monitored.

All content from Kiddle encyclopedia articles (including the article images and facts) can be freely used under Attribution-ShareAlike license, unless stated otherwise. Cite this article:
Edinburgh Vaults Facts for Kids. Kiddle Encyclopedia.