Eduardo A. Roca facts for kids 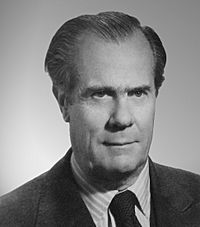 Eduardo Alejandro Roca (15 December 1921 – 17 May 2019) was an Argentine lawyer, academic and diplomat. He was Argentina's Ambassador to the United States, serving from 1968 to 1970. He also served as the Ambassador of Argentina to the United Nations during the Falklands War in 1982. He was born in Buenos Aires. He was the grand-nephew of Julio Argentino Roca.

All content from Kiddle encyclopedia articles (including the article images and facts) can be freely used under Attribution-ShareAlike license, unless stated otherwise. Cite this article:
Eduardo A. Roca Facts for Kids. Kiddle Encyclopedia.