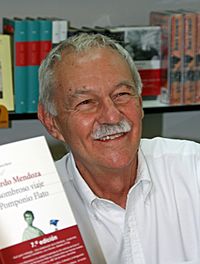 Eduardo Mendoza Garriga (born 11 January 1943) is a Spanish novelist. He was born in Barcelona. Between 1973 and 1982, he worked as an interpreter for the United Nations. In 1975 he published his very successful first novel, La Verdad sobre el Caso Savolta (The Truth About the Savolta Case).

The Spanish newspaper El País published two of his novels in instalments, Sin Noticias de Gurb (No Word from Gurb, 1990) and El Último Trayecto de Horacio Dos (The Last Journey of Horatio Dos, 2001), both of them science fiction comedy novels.

In 2016 he was awarded the Premio Cervantes.

All content from Kiddle encyclopedia articles (including the article images and facts) can be freely used under Attribution-ShareAlike license, unless stated otherwise. Cite this article:
Eduardo Mendoza Garriga Facts for Kids. Kiddle Encyclopedia.