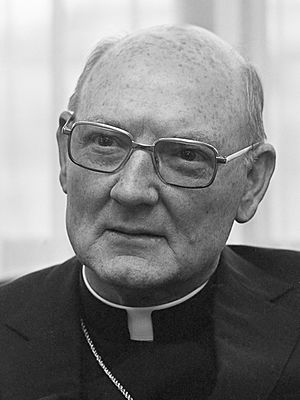 Edward Idris Cassidy AC (5 July 1924 – 10 April 2021) was an Australian Roman Catholic cardinal priest. He was the President Emeritus of the Pontifical Council for Promoting Christian Unity. He was in charge of the Commission of the Holy See for Religious Relations with the Jews. He was made a cardinal on 28 June 1991. He spent most of his career in the diplomatic service of the Holy See. Cassidy was born in Sydney.

All content from Kiddle encyclopedia articles (including the article images and facts) can be freely used under Attribution-ShareAlike license, unless stated otherwise. Cite this article:
Edward Cassidy Facts for Kids. Kiddle Encyclopedia.