Edward Villella (born October 1, 1936) is an American danseur and choreographer. He is frequently cited as America's most celebrated male dancer of ballet at the time. Villella was inducted into the Florida Artists Hall of Fame in 2007.

Villella became a member of the New York City Ballet in 1957, rising to soloist in 1958 and principal dancer in 1960, last dancing there in 1979. Among his most noteworthy performances were Oberon in George Balanchine's ballet A Midsummer Night's Dream (with music by Felix Mendelssohn), Tarantella, Rubies in the Balanchine ballet Jewels, and Prodigal Son.

Villella was the first American male dancer to appear with the Royal Danish Ballet, and the only American ever asked to dance an encore at the Bolshoi Theatre in Moscow. He danced at the inaugural for President John F. Kennedy, and performed for Presidents Johnson, Nixon, and Ford. He won an Emmy Award in 1975 for his CBS television production of Harlequinade. He danced in two television versions of The Nutcracker (in different roles), in a ballet film version of A Midsummer Night's Dream, and in a 1966 TV production of Brigadoon, in which he played the tragic suitor Harry Beaton. During the 1960s he and his dancing partner Patricia McBride, who starred together in a 1965 television version of The Nutcracker, appeared often on The Ed Sullivan Show. In 1973, Villella appeared as himself in an episode of The Odd Couple titled "Last Tango in Newark" during which he said (much to Felix's dismay) that he always wanted to be a professional football player and that he took up ballet to meet girls; his son, Roddy, also appeared. In 1983, Villella guest-starred on the soap opera Guiding Light. 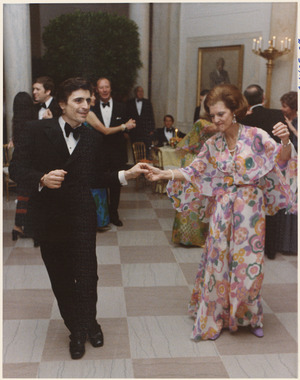 First Lady Betty Ford and Edward Villella dancing at the White House May 8, 1975

After retirement as a performer, Villella was the artistic coordinator of the Eglevsky Ballet from 1979 to 1984 and the director of Ballet Oklahoma (now Oklahoma City Ballet) from 1983 to 1985. He has also been artistic advisor to New Jersey Ballet since 1972 and currently is a special artist at New Jersey School of Ballet. He was named founding artistic director of Miami City Ballet in 1985 and served in that role until 2012.

In 1971, Villella received the Golden Plate Award of the American Academy of Achievement. In 1997, Villella was named a Kennedy Center Honors recipient, and was awarded the National Medal of Arts by President Bill Clinton. He was also named the Dorothy F. Schmidt artist-in-residence at Florida Atlantic University in 2000. He was inducted into the National Museum of Dance's Mr. & Mrs. Cornelius Vanderbilt Whitney Hall of Fame in 2009.

All content from Kiddle encyclopedia articles (including the article images and facts) can be freely used under Attribution-ShareAlike license, unless stated otherwise. Cite this article:
Edward Villella Facts for Kids. Kiddle Encyclopedia.