Edwin Abbott Abbott FBA (20 December 1838 – 12 October 1926) was an English schoolmaster, theologian, and Anglican priest, best known as the author of the novella Flatland (1884).

Edwin Abbott Abbott was the eldest son of Edwin Abbott (1808–1882), headmaster of the Philological School, Marylebone, and his wife, Jane Abbott (1806–1882). His parents were first cousins.

He was born in London and educated at the City of London School and at St John's College, Cambridge, where he took the highest honours of his class in classics, mathematics and theology, and became a fellow of his college. In particular, he was 1st Smith's prizeman in 1861. In 1862 he took orders. After holding masterships at King Edward's School, Birmingham, he succeeded G. F. Mortimer as headmaster of the City of London School in 1865, at the early age of 26. There, he oversaw the education of future Prime Minister H. H. Asquith. Abbott was Hulsean lecturer in 1876.

He retired in 1889, and devoted himself to literary and theological pursuits. Abbott's liberal inclinations in theology were prominent both in his educational views and in his books. His Shakespearian Grammar (1870) is a permanent contribution to English philology. In 1885, he published a life of Francis Bacon. His theological writings include three anonymously published religious romances – Philochristus (1878), where he tried to raise interest in Gospels reading, Onesimus (1882), and Silanus the Christian (1908).

More weighty contributions are the anonymous theological discussion The Kernel and the Husk (1886), Philomythus (1891), his book The Anglican Career of Cardinal Newman (1892), and his article "The Gospels" in the ninth edition of the Encyclopædia Britannica, embodying a critical view which caused considerable stir in the English theological world. He also wrote St Thomas of Canterbury, his Death and Miracles (1898), Johannine Vocabulary (1905), Johannine Grammar (1906).

Abbott also wrote educational text books, one being "Via Latina: A First Latin Book" which was published in 1880 and distributed around the world within the education system. 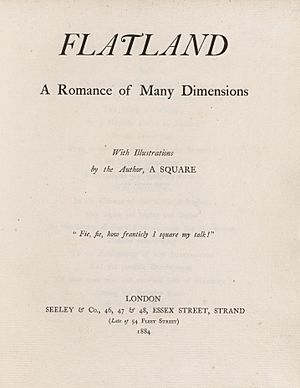 Abbott's best-known work is his 1884 novella Flatland: A Romance of Many Dimensions which describes a two-dimensional world and explores the nature of dimensions. It has often been categorized as science fiction although it could more precisely be called "mathematical fiction".

With the advent of modern science fiction from the 1950s to the present day, Flatland has seen a revival in popularity, especially among science fiction and cyberpunk fans. Many works have been inspired by the novella, including novel sequels and short films.

All content from Kiddle encyclopedia articles (including the article images and facts) can be freely used under Attribution-ShareAlike license, unless stated otherwise. Cite this article:
Edwin Abbott Abbott Facts for Kids. Kiddle Encyclopedia.