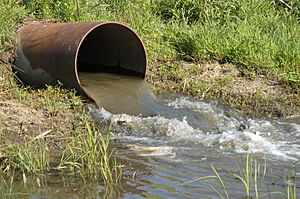 Effluent is an outflowing of water or gas to a natural body of water, from a structure such as a wastewater treatment plant, sewer pipe, or industrial outfall. Effluent, in engineering, is the stream exiting a chemical reactor.

Effluent is defined by the United States Environmental Protection Agency as "wastewater - treated or untreated - that flows out of a treatment plant, sewer, or industrial outfall. Generally refers to wastes discharged into surface waters". The Compact Oxford English Dictionary defines effluent as "liquid waste or sewage discharged into a river or the sea".

Effluent in the artificial sense is in general considered to be water pollution, such as the outflow from a sewage treatment facility or the wastewater discharge from industrial facilities. An effluent sump pump, for instance, pumps waste from toilets installed below a main sewage line.

In the context of waste water treatment plants, effluent that has been treated is sometimes called secondary effluent, or treated effluent. This cleaner effluent is then used to feed the bacteria in biofilters.

In the context of a thermal power station, the output of the cooling system may be referred to as the effluent cooling water, which is noticeably warmer than the environment. Effluent only refers to liquid discharge.

In sugar beet processing, effluent is often settled in water tanks that allow the mud-contaminated water to settle. The mud sinks to the bottom, leaving the top section of water clear, free to be pumped back into the river or be reused in the process again.

All content from Kiddle encyclopedia articles (including the article images and facts) can be freely used under Attribution-ShareAlike license, unless stated otherwise. Cite this article:
Effluent Facts for Kids. Kiddle Encyclopedia.